How memes may hurt you amidst controversy 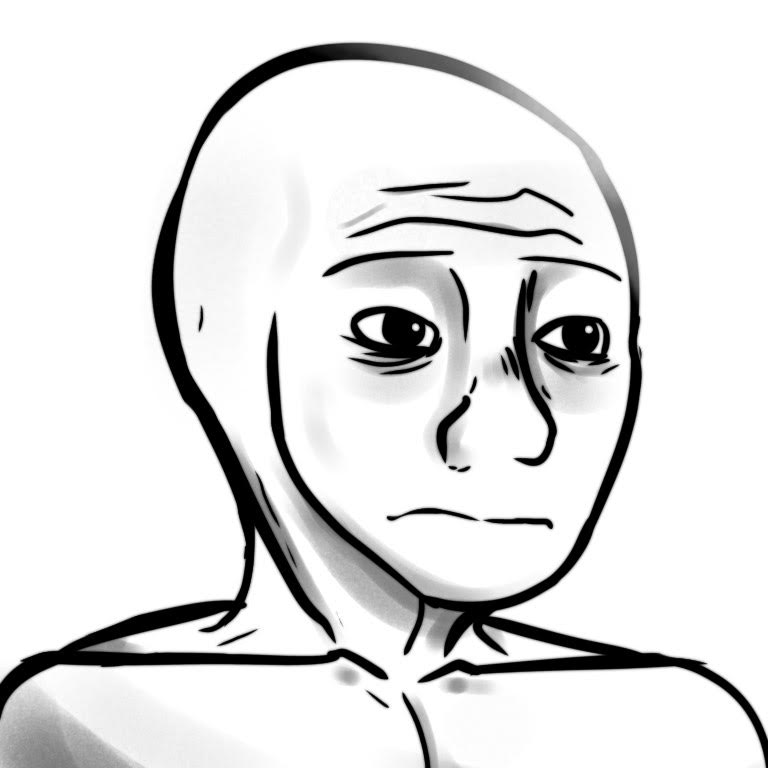 Artist’s rendition of the famous “Wojak” meme by Jules VanRy

It’s infected its way into social media since the early 2000s. It’s malicious and has been responsible for people changing their entire perception of life. Worst of all, people create, repurpose it, and use it for their own selfish enjoyment.

But aren’t memes harmless? They couldn’t have been that much of a detriment to the world today. Really, it’s a matter of perspective.

There are enough memes posted on the internet to prove that there is an issue with them. From one of the first iconic memes becoming a hate symbol, to them showing up in marketing and advertising as a means of acquiring more consumers, it’s no wonder that they’ve fallen under general controversy.

But what is a meme?

Sterling VanRy, a young adult who has seen memes on the internet in the 2000s, says, “I think a meme is generally something taken out of context, either a picture or a video or a sound, or a person or a place, repurposed to fit some silly narrative.”

Sterling wants it to be known that he appreciates memes about vaporwave, an internet aesthetic that incorporates slowed music and arcade visuals, often known for incorporating themes of consumerism and advertising in the late 20th century. 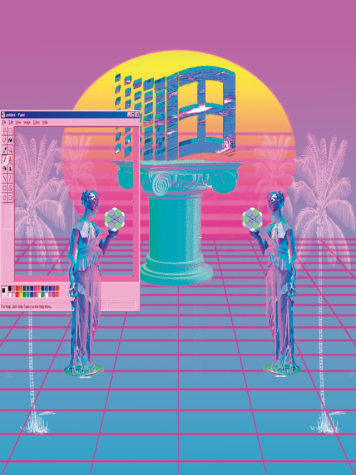 Example of the vaporwave aesthetic

He also appreciates memes of Dr. Manhattan, a character created by Alan Moore in his critically acclaimed graphic novel The Watchmen, known as a critique of superhero media.

The importance of this character, in particular, is his ability which makes him impervious to time and space. This has been created due to how many people can relate to feeling dissociated in reality –  not entirely as a tragedy, but more or less as a sense of clarity. 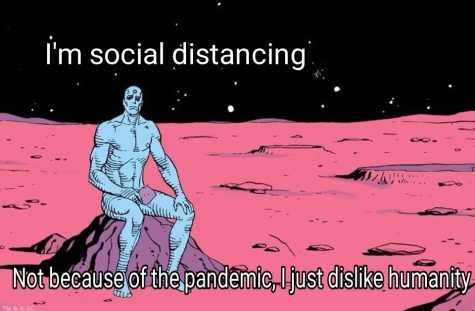 However, there is one other meme that stands out to Sterling: “Pepe is timeless – Pepe is a good example of that [being taken out of context] because it’s been removed multiple times away from its original meaning from what it came to mean, to what it is now. A meme is constantly evolving, changing throughout time.”

Pepe the Frog, a vastly known meme, started out as a harmless character in a 2005 comic by Matt Furie known as “Boy’s Life.” 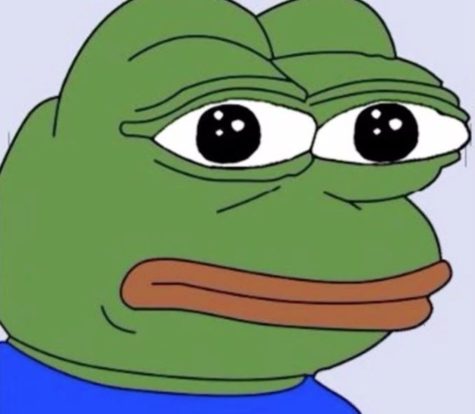 The comic itself followed similar anthropomorphic animals as they all experienced life in college. He quickly became a widespread meme, for his, again, relatability. Soon enough by 2009, Pepe was everywhere – on Tumblr, Reddit, 4chan, you name it. But it didn’t last long. He was eventually put into dark narratives and gained a reputation online as a hate symbol.

How could this have happened to such a harmless piece of media? The answer is simple.

According to “The Selfish Gene” by Richard Dawkins, a renowned biologist, a meme is “a name for the new replicator, a noun that conveys the idea of a unit of cultural transmission, or a unit of imitation.”

This explanation is surprisingly accurate, as it fits a lot of the same ideas that genes have: they are created, passed down, and fade away.

As we know memes now, we use them as a means to convey jokes and jabs at current or past experiences, transporting them around the internet and our lives until it’s everywhere for a while, and then it simply vanishes, and everyone is off to the next meme.

Often, the explanation is pretty comprehendible as to why. There’s a lot to it, though.

For starters, this relevance is ‘gained’ in a varying degree of ways. Usually, it will start after a certain event or figure makes itself known in practically any way, be it death or controversy. From there, it is implemented into current, compatible meme formats. The ones that stand out are the ones that break the mold, becoming a format of its own. These ones will likely be remembered fondly across media-sharing platforms, and may even show up again, becoming known as a tool of the trade.

Mr. Fitts, a math teacher at the iSchool, has an explanation: “I think the problem is now with technology and social media, that they [memes] spread like wildfire. So if somebody posts something that’s insensitive or controversial, it’s gonna go viral pretty quickly. It adds more fuel to the fire, and adds to the controversy.”

Other times, memes will pop up with a lack of context and a niche following, until it spirals into popularity depending on the content itself. There is value in individual memes like this, as they can stand out on their own feet – until they don’t.

Mr. Fitts continues, “If you think about old school magazines, even like The New York Magazine, right? They use a lot of funny cartoons, like political satire. It’s a cool way to express a funny idea, or something like that.” 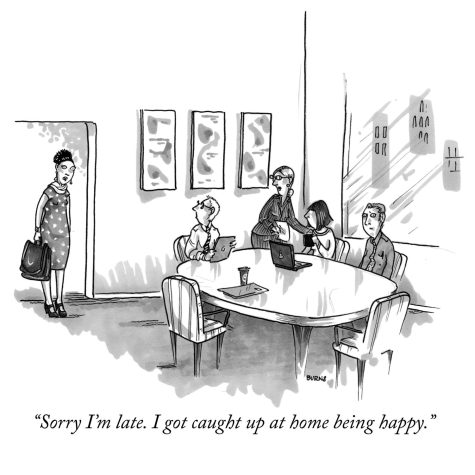 Example of a cartoon from the New Yorker magazine

The reason this relevance and popularity remain is because of how it relates to other people’s ideals on life within politics, school, or even the most mundane experiences.

For that reason, it’s worth wondering: how is this relevance and popularity lost?

A lot of the time, memes fall off the edge of the internet because they’ve simply lost interest. After it’s latched onto people’s minds, they’ll fall after a while because it will be a tired trick after a few weeks, and in comparison to all other memes, it will have had its moment.

However, as little of value as memes really are, there is such a thing as them getting into the ‘wrong hands’. This usually takes the form of people misusing it in an out-of-context narrative, or misunderstanding the point of it entirely, like a brand that’s trying for some gold stars on social media.

Or as Ryan Nair, a reporter on The Drum, puts it, “Why would you be enticed to buy something from a big company who rely on this new wave content to promote their name? It all just seems a little disjointed and transparent – ‘Oh, let me just jump on the latest trend to make myself seem relevant’ – it’s a tale as old as time, and not a good one.”

This isn’t exclusive to corporations: politicians and other significant figures can use them, tampering with the reputation of the meme, as its meaning and image will become hollow when covering the ulterior motive of wanting attention.

These individuals try to market off of this mainly from how social media has impacted our lives. Because of the constant flow of content we receive now, we’ve naturally developed low attention spans. We won’t latch onto anything for anything longer for a moment, unless it really stands out.

Say, for example, a meme. Or more importantly, a relevant one.

“I kinda just like seeing how people continuously make these picture-media jokes, and incorporate them into their personal belief systems,” Sterling notes. The issue with misuse of memes that reject or construct their own opinionated narrative is that the viewer has to turn their brain on in order to tune them out, depending on the beliefs in question.

Yet at the same time, to avoid controversy amongst the contexts memes show up in, these creators have defended themselves with the claim that all their work is simply satire; it isn’t the most convincing defense, but to them, that thin line can look like a wall depending on point of view.

Arguably, the most impactful meaning behind this scenario is that using memes for some selfish goal becomes shallow from how it immediately grabs the attention of the viewer, practically against their will. So by comparison, it stands out.

Sterling notes, “Meme culture has taken up so much of our current everyday media, so you see it from everywhere from news to protests.” The way it attracts people leads it to show up everywhere not just on social media, but in real life, and it can have a deliberate impact based upon the context it shows up in.

Memes are increasingly dangerous this way. “A lot of what spreads information now is these little bytes that people can easily share. A lot of facts, information, stories, and ideas are passed through these silly little pictures now. Which I guess is a good or a bad thing. Sometimes they’re made out to be too ridiculous,” Sterling admits.

On the internet, forgiveness isn’t commonplace. Because of this, depending on a meme having one bad day in certain contexts, it’ll be thrown in the gutter and be lost to the people who selfishly associate the meme with dangerous satire.

Yet at the same time, it becomes an informative tool, without people even recognizing it as such: “Other times, people who generally don’t learn about something, learn about it – because it’s been turned into something so ridiculous you can’t help but share it.”

It’s hard to be ignorant of current events if something so provocative as memes are put in place of those events. It can teach people something that they didn’t know before, and again, depending on context – likely is something they didn’t want to learn at all.