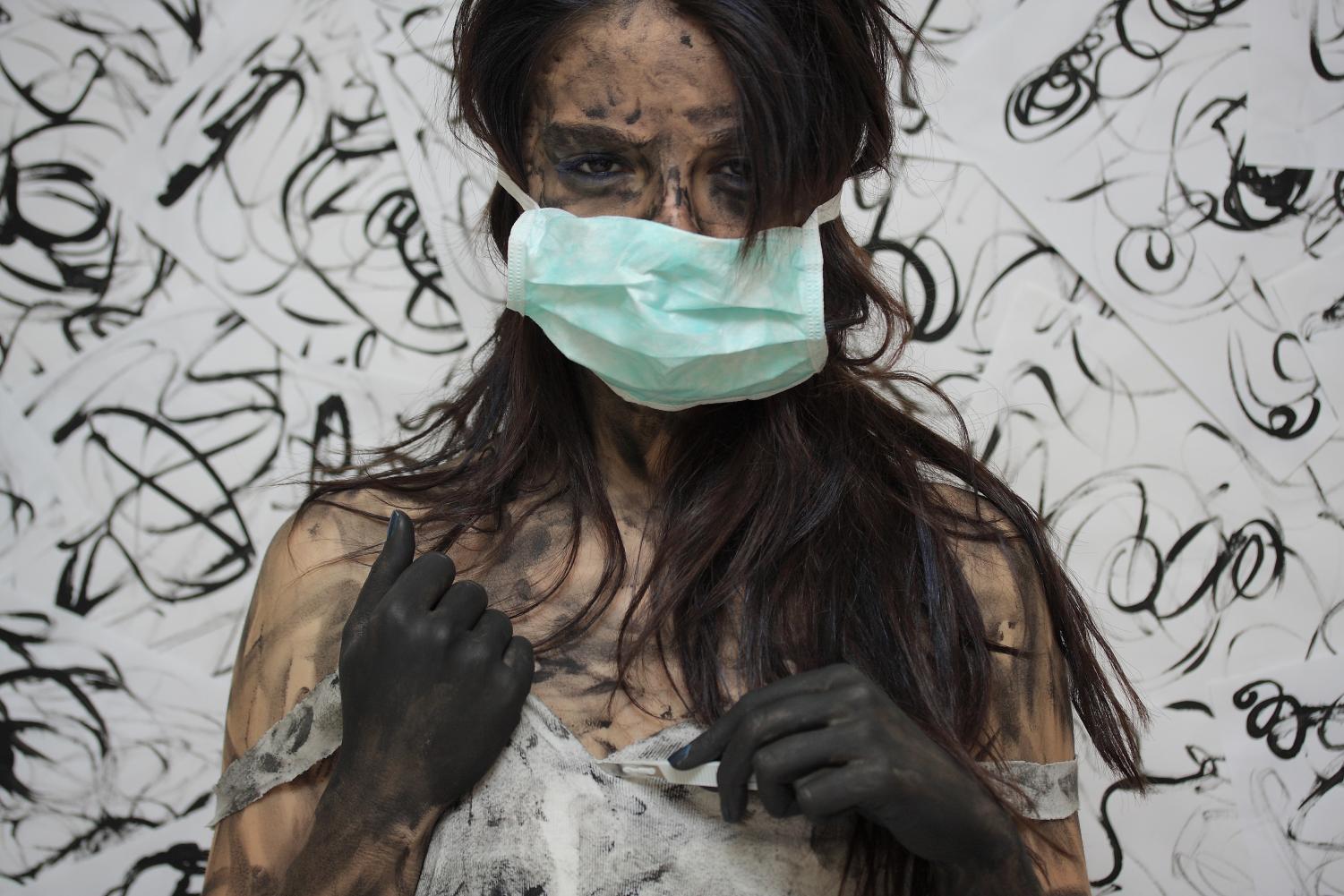 When you walked inside your classroom on March 7th, 2022, you probably expected all classrooms to be filled with teachers and students wearing no masks. However, you walked into something completely different. Almost all students kept their masks on their faces.

But the Covid cases in NYC are decreasing, so why are masks still on?

A big reason for this, other than the fact that people are still nervous about Covid, is that some students aren’t ready for their own “face reveal” and are feeling too nervous to show everyone at school their faces after wearing masks for a year and a half.

In fact, according to a recent survey, out of 12 iSchool students who responded, 75% agree that people, in general, feel that their self-image is a lot higher when a mask is on.

Students’ perceptions of their appearance are actually supported by Cardiff University’s study about people’s attractiveness. Some of the people ranked were wearing masks and the others were maskless.

According to Dr.Michael Lewis, a Ph.D. psychologist,  “Researchers at Cardiff University were surprised to find that both men and women were judged to look better with a face-covering obscuring the lower half of their face.”

So, although we are wearing masks for safety reasons, it’s been proven that masks are also a great way to make us more comfortable with our looks for the day.

But how is that possible? How have simple masks made us feel more “attractive,” and why has it become such a discussion on whether students will be taking theirs off?

One of the greatest reasons why masks may affect students’ self-esteem is because they hide insecurities.

When wearing a mask, the bottom of your face is covered, which includes your nose, your lips, acne on your cheeks, and anything else you may be insecure about.

Because of the eurocentric beauty standards present in America, some people tend to feel unworthy and ugly if they don’t live up to the criteria.

According to Chen and others, the eurocentric beauty standard is having “a small nose, bigger lips, and high cheekbones.”

Farwa Tashin, a 10th-grade student at Brooklyn Tech, explains, “The general idea of the beauty standard is that you have to look a certain way to be pretty so when a person doesn’t, especially underneath their mask, they feel insecure and feel uncomfortable taking off their mask.”

But of course, not everyone has those features because we’re all different, and that’s not a bad thing either. Comparing ourselves to Eurocentric features is unnecessary because there’s no way we can change them, so we must accept our differences.

“The bottom half of someone’s face is what really defines your face and sets you apart from others.” And these differences are what make us unique.

But because everyone is always comparing themselves to the Eurocentric beauty standards, they feel that these “defining” features of their face are invalid if they aren’t how the world wants them to be. And so because of that, they resort to masks to cover up their insecurities.

Everyone resorting to covering their “flaws” with masks don’t want to take them off because they’re nervous about how people would perceive them afterwards.

But of course, that is not the case.  So we must learn that everyone’s features are different and there’s no room to judge.

Another reason why people tend to be more attractive with masks on is because eyes can be very appealing.

Tashin explains, “In general, everyone has pretty eyes, even if you have a basic eye color. I think everyone’s eyes and the top half of their face is good looking.”

Kazi Tishan, a 10th-grade student at Brooklyn Tech, agrees and even compares it to noses and lips: “Eyes, generally, are the most attractive part of someone’s face because everyone’s eyes look good. But not everyone’s nose and mouth are ‘traditionally’ as attractive.” When he’s referring to “traditionally,” he is referring to the beauty standard.

No matter if you have brown or blue eyes, almond-shaped or round-shaped eyes, your eyes are probably one of the most attractive features of your face. Maybe some people have a preference for a specific eye shape or color, but regardless, eyes are always appealing to others.

However, something pessimistic about masks is that it is harder for people to express their emotions because you only see someone’s eyes.

A freshman at the iSchool, Castle Bloodgood, explains, “I mean when you can’t see people’s faces or their expressions, you kind of have to guess what they’re feeling which makes it harder to have interactions with people.”

Stella Kear, also in the 9th grade, adds, “I think a part of me is hidden because of them. Like everyone is used to showing their face to everyone but now we only rely on someone’s eyes to sense their emotions so I would say some connections have been lost.”

While it may seem that masks have been helping with people’s self-confidence, they have been making it harder for people to communicate with each other. And after having a pandemic where a lot of people lost some of their social skills due to not being able to talk with others, wearing masks and having them hinder our emotions doesn’t make the social aspect of our lives any much easier.

But, other than the fact that masks make it harder for people to connect and can cause people to overthink how people perceive them, a positive thing coming from masks is that wearing them takes a lot less effort and makes our lives a bit easier.

Kear says, “For example, if someone feels more comfortable with makeup on as opposed to having their face all-natural, they don’t have to make an effort for the bottom half of their face since they can just cover it up for the day.”

Tishan describes how masks make it easier for people to go out every day without having to worry about their insecurities.

He says, “If you have acne, for example, you can always put on a mask and have it covered without worrying about it. It doesn’t take any effort to just put on a mask but it takes effort to manage your acne, or just other insecurities a person may have.”

There are both pros and cons to having masks on for a person. Of course, a mask should be kept on when Covid is still around for everyone’s safety, but it does cause people to overthink about how people perceive them when they take it off, and it can lead to many connections being lost.

But it can allow people to make less effort in their looks and boost their confidence overall.

Above is a picture of a person wearing a mask. How would you picture this person’s looks below their mask?

This is a psychological term called amodal completion.

Amodal completion is the ability of a person’s brain to see an entire picture of the object, even though most of the parts of the object are covered.

The way that this connects to people wearing masks is that although we cannot see a person’s full face because they have a mask on, we still envision parts of their face, like their nose or lips.

“It uses generic information about how nose and mouth regions tend to look like,” states PsychologyToday.

Yes, we’ve never seen the person’s nose before, but we’ve definitely, for example, seen other people’s noses so our brain generates that information and comes up with an image for that specific person.

However, we are not always correct with our predictions. Everyone is different and so our guesses are not always accurate. So, when someone finally takes off their mask after months of wearing them, it may feel very strange.

Amodal completion in the form of masks is a prime example of another reason why people may not take off their masks. They’re nervous about the reactions of the people around them who have seen their faces covered for months.

You’re scrolling through TikTok, a social media platform that 63% of all teens are now using. As you are scrolling, you see various videos of people wearing their face masks in the beginning of the video and then taking off their masks in the end. The comments are filled with strangers from all over the internet judging them if they are in fact a mask fisher.

This is a new trend that almost all teens now recognize as “mask-fishing,” where teenagers all over the world, mainly on Tik Tok, ask the internet if they are a mask fisher.

A mask fisher is when someone looks more attractive with their face mask on than off. Some people take this very seriously because they feel like wearing a mask deceives others. This is another reason why people are so afraid to take off their masks.

It is basically catfishing but with masks instead.

“Well ‘mask-fishing’ came from the term ‘catfishing.’ That can negatively impact someone because it’s not like you want to be called a catfish on the internet, saying that you look better through pictures than in real life,” explains Tishan.

And this also ties back to the eurocentric beauty standards that were previously discussed.

Kear says, “I know since the pandemic, people have been creating toxic beauty standards for themselves and even for others.”

Strangers over the internet have been judging people’s noses, skin, and lips, not realizing that everyone is beautiful in a different way. And people often compare themselves to people who fit the beauty standard and let strangers’ thoughts about them feed into their insecurities, which lowers their self-esteem.

Maila Corea, a student in the 9th grade, explains, “When someone is scrolling on Instagram, for example, and they see someone without their mask and they fit the beauty standards, it makes them more insecure about themselves because they might not have a small nose or blue eyes.”

But no matter how “trendy” mask fishing is in our modern society, people can agree that this new trend is not needed.

Bloodgood mentions, “I just find it so unnecessarily mean when someone says ‘let’s test out if someone is mask fishing.’”

We may be comparing ourselves to people on the internet who have small noses, big lips, high cheekbones, and clearer skins. We probably even ask ourselves if we are mask fishing.

But in reality, mask fishing is completely immature. As a society, it has to be clear that no matter the shape of your nose or how clear your skin is, no one is mask fishing because no one is a bad-looking person.

There are a million reasons why people are ashamed to take off their masks. They don’t want to be labeled as a mask fisher because they don’t fit the beauty standards. They are also nervous about how people will react to seeing their full face for the first time because of how people will perceive them afterwards.

On a positive note though, someone’s “face reveal” is not and should not be negative. Only because someone looks different than what someone expected them to look like doesn’t mean that they necessarily look bad.

But some people who are taking off their masks are scared about others’ perceptions.

Yet, Corea mentions, “I don’t feel like it’s necessary for people to worry about how they look without one on because people have gone such a long time without it that for some people, it doesn’t matter as much.”

Tishan even compares it to someone who takes off their glasses after months of wearing them:

“When someone takes off their glasses after wearing it for a couple of years, everyone around them may not be used to them not having glasses on but after maybe a week or a couple of days, it’ll be like the person never even wore glasses in the first place. That’s probably how it will be with masks.”