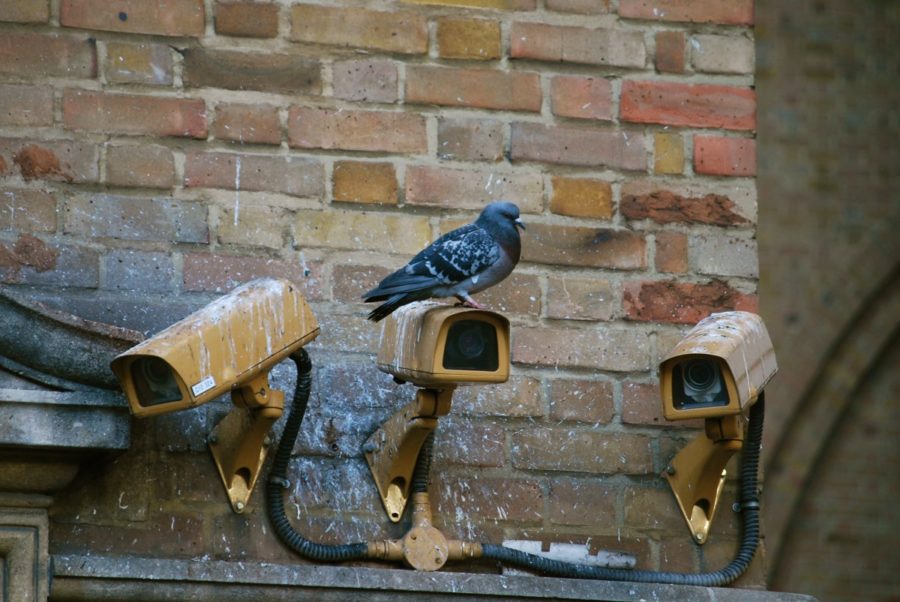 A city-flocking pigeon overlooks the city with the help of his security cameras.

If you live in New York City, or any city for that matter, you run into pigeons every day. At the bagel cart, walking home, or even in the subway, pigeons aren’t escapable. Whether you view them as “the rats of the sky,” as New York City Park Commissioner Thomas C. Fields, referred to them as, or just animals surviving, is a personal view.

However, there may be something these so called rats of the sky may be hiding– they may be government spies. While this may seem like a pretty illogical claim, there are a couple key points that have lots of people questioning if pigeons truly are just street wanderers.

Brought up originally by a viral post on Reddit, the movement has spread and raised eyebrows worldwide. Other memes have also addressed the topic, with questions surrounding baby pigeons and if they are real or not.

People at the iSchool have their own opinions on the topic as well.

Sophomore Dylan Volotsenko says that he’s never seen a baby pigeon, but thinks “they must be hiding in their nests all day, that’s why we don’t see them.”

Chanzlah Julien has a differing opinion: “I really don’t know they [baby pigeons] be at.” When asked if he believed if birds are government spies, he appeared confused at first, but then responded “Yeah, because they’re around us 24/7. There’s never a time where you don’t see a pigeon around you.”

If it did come out to be confirmed that these so called rats of the skies were in fact tools that are used to spy on everyday people, America wouldn’t be the first nation to be pursuing a “hiding in plain sight” tactic of security. China has reportedly launched a spy drone that looks exactly like a bird to watch over the nations cities.

Pigeons have been used for multiple operations in the past, like carrying important messages during times of war, specifically in World War 1 and 2. iSchool Sophomore Ronald Noel Jr. uses this point as reasoning as to why pigeons are operatives under the government. : “Lowkey I think they do, there’s always a pigeon around a person, I know they used pigeons for stuff in World War II as well.”

Due to the pigeon’s flight speed as well as the ability to fly at certain altitudes, it was perfect for nations to use these birds to communicate with each other during times of war. However, it’s been revealed that pigeons weren’t only uses as means for communication. They were used as spies during the Cold War to spy on Russia, according to this Smithsonian article. If the government had the ability to use pigeons to spy on others decades ago, what’s stopping them from doing it at this very instant?

Or, maybe they’ve already been doing it. Maybe it’s been just like China the entire time, where there are bird-like drones scanning us from the height of skyscrapers, blind to us in a time where we always have our heads looking down at our phones.

Regardless, if pigeons truly have their eyes on us whenever people are out on the street, it raises some massive security questions. In a time where just a few internet searches can reveal information about someone’s entire life– you have to question whether eyes truly are on you all the time.

With more and more legislation coming out which takes away privacies that Americans have, it comes into question that if pigeons truly are being used as a watch on the public, is it for security or is it just blatantly spying?

While some arguments can be brought up on both sides, with allegations that governments like the NSA have been violating the 4th Amendment by tapping into phone calls, text messages, and other messaging apps without knowledge of the user. With more and more people connected to the internet each day, is the collection of data’s intent mainly for keeping the public safe, or searching in hopes to find something suspicious and convict them for it?

Unfortunately though, it usually ends up that the government goes into people’s private lives after they’ve been convicted, meaning that all these privacy restrictions seem to be useless anyway.

If these pigeons truly are watch drones, they must be pretty ineffective in the first place. Just imagine your sole job is to be watching over the people of an 8 million, but instead you’re casually flying around the city, and instead of looking for criminals you’re looking for the biggest piece of food on the street. While one of these may not be bad, flocks of pigeons seem to be fighting over a small piece of food. So maybe these rats of the sky aren’t as intelligent as once thought.

However, this shouldn’t let people be off their guard. Next time you see a flock of pigeons attacking a bagel, keep in mind that their eyes may not just be on a New York delicacy— they may also be on you.