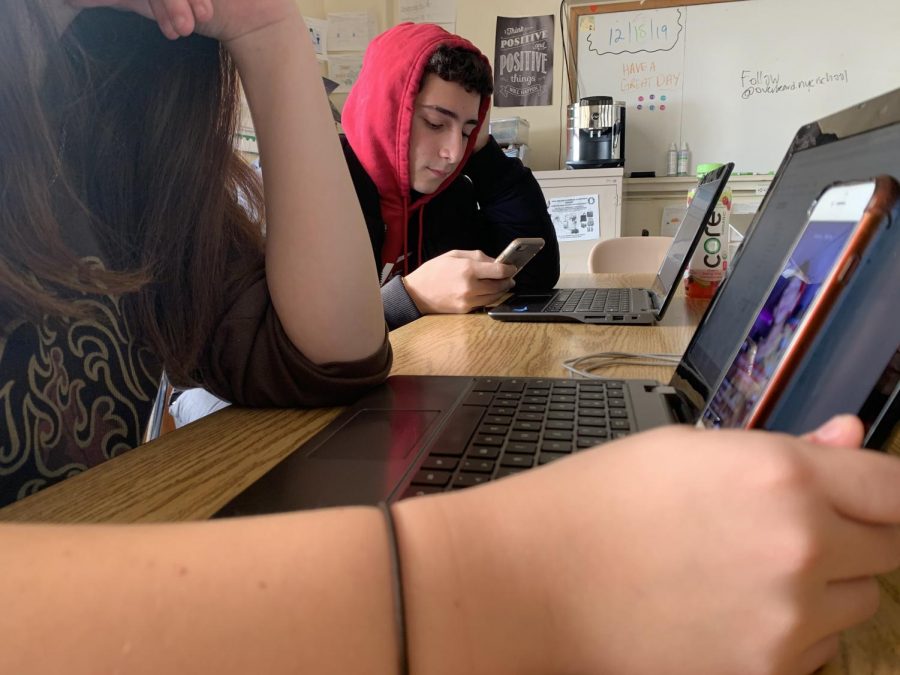 Two NYC iSchool sophomores are using their phones; watching Tik Tok videos and texting their friend on Snapchat during class.

Ring! Ring! The alarm on your nightstand is causing a ruckus and vibrating on the table. You go to turn it off and get up to start your day. What do you do first? Most teenagers would pick up their smartphone and start browsing through the notifications.

It is common for teenagers to get their first phone in middle school or high school. When they do, they are using it constantly, whether it is at the dinner table, hanging out with friends, or during school, they always have their phones in their hands.

Phones are a prominent part of our lives. We can easily access the internet and contact people who are miles away from us.

Shanee Krichely, an NYC iSchool sophomore, says, “[My phone] allows me to communicate with my friends and family if I am not with them at that moment. I consider my cellphone pretty useful because of this.”

Communication through the usage of smartphones is effective and quick, however, phones can often be a distraction to many people.

According to Bank My Cell, about 86 percent of smartphone users check their phones while they are with their family and friends. In fact, the average smartphone user picks up their phone at least 63 times each day.

These smartphones are causing issues like distractions from reality. Teenagers are constantly staring at their phones while talking to someone, so they aren’t even paying attention to what’s happening in front of them.

For Eric Garcia, a sophomore, said that his phone usage is affecting his sleep schedule as he stays up late to watch YouTube videos or play games on his phone.

“For me, it is affecting my sleep. Whenever I try to go to sleep, I suddenly get a notification and I end up checking it and instead of putting my phone back down, I’m on it for another hour,” says Garcia.

Statistics from Teens Spend More Than 7 Hours On Screens for Entertainment a Day state that the average time a teenager spends on their smartphone is seven hours and 22 minutes.

Tweens on the other hand, are not far behind. They spend an average of four hours and 44 minutes on their phones.

Though, this is not the case for a few NYC iSchool students, Garcia says, “According to my screentime, my daily average on my phone is about four hours a day.” This is not far from the statistics average for a teenager; nonetheless, it is still slightly better.

The screen time for a teenager varies depending on the person and what type of day it is. Teenagers tend to use their smartphones less on weekdays because half the day, they are at school.

Sometimes, the amount of time teenagers spend on their smartphones can affect their moods or mental health. Krichely said, “If I look at instagram when I am in a bad mood, it worsens my mood because the whole point of instagram is to post cool photos but when I see people post about activities they did, I now want to do that too.”

Often, people feel worse when they get on their phone because they might see something online that they do not like, and this can affect them drastically for the rest of the day.

Not only are smartphones affecting teenagers sleep schedules and moods but also their education and school life. “Occasionally, I am on my phone for too long that I forget to do assignments that are due and then I end up having a few missings, 25” mentions Hossein.

Smartphones are hindering teenagers’ social life and health. It is affecting their education and how well they perform in school.

However, many teenagers have strived to restrict their phone usage; some have succeeded, others have failed.

So hopefully, the next time you have the urge to pick up your phone and check the new messages you received, think about how it may be affecting you at the moment, whether it be that you are at a lunch with your friends, on a date, doing homework, or about to sleep.