The rise & success of TikTok in the music industry 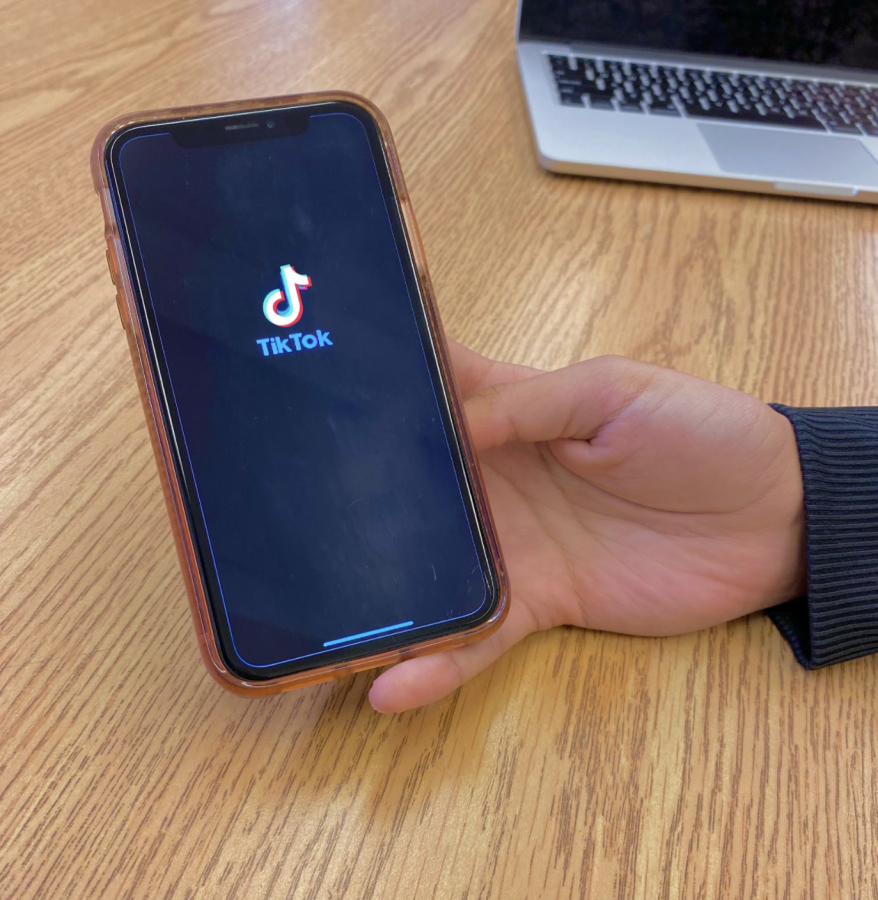 Photo taken by Katherine Camacho and Raphielid Portorreal on November 1, 2021

The buzzing noise continuously vibrates the right pocket of your jeans. You reach for the phone and open up the notifications leading to the popular app of TikTok. This famous software has captivated the attention of many young teens and adults. Audios and dance routines generate the perfect formula for musical sensations and new upcoming artists in the entertainment business.

TikTok has created a huge impact on the music industry. It’s become a huge app for many teenagers, where they constantly stumble upon new audios and tunes on a daily basis. Individual pop and rap artists have seen an increase in their popularity due to the massive audiences TikTok has accumulated.

Doja Cat is one of those few artists that has made it to superstar status due to the roaring popularity of TikTok. Her song, ‘Say So’, has been one of the most successful tracks of her career. Prior to its rise in the music charts, a TikTok creator named Yodeling Hayley made a dance routine out of the audio. The video reached 7.4 million views and 749.3k likes by December of 2019.

Vanessa Saavedra, a freshman attending the iSchool, mentions, “I remember coming across many videos of TikTok users doing the dance to ‘Say So’. This was around the time when TikTok was gaining more users, so this song got so much attention from the audience.”

On April 9th, 2021, Doja Cat released a new track called ‘Kiss Me More.’ The audio has been used 2.6 million times on TikTok. The social media platform alone made this song reach No. 1 on the Billboard Hot 100, and it stayed on the charts for 28 weeks. On top of that, her most successful album, ‘Planet Her,’ became a major hit because of the overwhelming shares on the app.

Rap artists like Don Toliver reached a dramatic turn point in his career because of TikTok. The songs ‘No Idea’ and ‘After Party’ have become some of the most used audios on the app towards the end of 2019. Both of his songs reached the Hot 100 on the Billboard music charts. Over 4.8 million videos were posted across TikTok and each gained millions of views and likes.

“I heard this song all across TikTok and even saw the dances that people were doing for the song,” says Ashlyn, a freshman at the iSchool, “It was exciting to see something different. People seemed like they were having fun doing the dance to both of these audios.”

Continuing the popular dances that went trending on the app, the well-known R&B artist “SZA” has been a part of several songs that have gone viral on the app. This includes ‘All The Stars’ and ‘Kiss Me More.’ These songs started trending due to the amount of dance content that went viral.  Her verse on ‘All The Stars’ caught the attention of many active users. The present success of the song was made possible through the shared audios and videos that were spread across TikTok’s platform. As a result of this matter, ‘All The Stars’ peaked at #7 on the Hot 100 charts, making it the most-streamed song on the album.

Marketing across the app has to be done in strategic ways in order to have a successful hit. The popular rapper Lil Nas X promotes his own songs through his self-made memes. His song ‘Old Town Road’ was dropped on July 19, 2019. It was picked up by lots of TikTok users and made into a smash hit, later winning many prestigious music awards.

“I personally feel that this was when the promotion of songs on TikTok became a huge thing. Many artists followed these steps and gained popularity across the app. Even those who aren’t well known by most people probably got famous through this system,” says Edgar.

Trademarking a certain name for a fanbase can boost publicity for the musician. The famous rapper Megan Thee Stallion started naming her fandom “hotties” and it helped her stabilize her prominence in the industry. For that reason, Megan’s fame started to expand tremendously in 2020. She released countless tracks during this time, which were well received from the TikTok community.

“I believe all her songs reached the Hot 100 Billboard chart. ‘Savage’ is a great example of it. A lot of people participated in the dance for the song, as well as other popular audios made by Megan,” says Vanessa.

The rapper received lots of support from the app. ‘Savage’ was published on April 6, 2020, and it gained over 19 million videos across the platform. Every short video of users dancing to the song garnered millions of views and likes.

Megan Thee Stallion was given the opportunity to collaborate with many mainstream artists, which have been in the music industry for much longer, such as Beyonce. Megan gained 4 Grammy nominations and won 3 Grammy Awards in total. On top of that, she has many brand deals and was able to branch her image even further with the help of TikTok.

There’s an unspoken long history of TikTok audios obtaining high success and reaching unbelievable numbers on the Hot 100 Billboard Chart. The numerical rankings of the songs entail how much radio play a song is receiving and how high the streams across music apps like Spotify and Apple Music are.

Streams and radio plays can have a great impact on the song’s longevity over the course of several music charts. Recent evidence shows that the more the song is promoted on TikTok, the higher it charts. Business Insider  reports that “…67% of the app’s users are more likely to seek out songs on music-streaming services after hearing them on TikTok…”

“If someone saw and heard a sound on TikTok, it would eventually become so popular and everyone would start listening to the song. It will most likely be heard throughout several different platforms as well,” says Sydney, a senior attending the iSchool.

The swarming audience of the app introduced a new market for music executives and non-mainstream artists that lacked exposure. The force of TikTok has become so powerful that its most popular creators are paid by record labels to promote the songs of their artists.

Consequently, the way music is marketed in today’s digital age has evolved quite tremendously. With the advancement of technology and social media platforms, music marketing has expanded into different forms over the years. The radio was introduced to American homes in the 1920s and 1930s. This convenient machinery revolutionized the way people across the U.S. and around the globe listened to their favorite tunes. The pioneers of music labels are associated with this era considering that they paved the way for the current systems and functionalities of the industry.

The radio developed over time due to the rapid advancements in technology. At the present time, this was a brand new way of distributing and promoting music. By the end of the 1920s, approximately 100 million  Americans had access to the radio. This groundbreaking device initiated a new marketplace for music and its distributors.

Following the success of the radio, visual media became the futuristic method for music marketing and sharing. The television provided a new sight for entertainment since it gave the American public a fresh interactive experience. With the combination of sound and visuals, the popular artists of the 1940s and 50s gave live performances on the big screen. American families sat around their living rooms and watched the black and white TV, anticipating the dance routines and gifted singing abilities of those artists.

The rise of this new invention gave birth to cable channels. One of the most notable and popular entertainment channels at the time was MTV. This platform gave exposure to the performances of artists and sparked the music video era of the industry.

Music Television, also known as MTV, first aired on American televisions back on August 1, 1981. It became known for its 24-hour long music videos. The recognition was picked up by individuals who had access to this network and many musical artists obtained their own fans through this system.

After the MTV era of pop music, the music industry went through another radical change. The usage of computers and digital media began to revolutionize the way people listened to their favorite songs and how they shared their desired tracks. MP3 players, CDs, and internet websites like Youtube completely took over the industry, making distributors step away from old-fashioned methods to more electronically based techniques.

With the invention of the iPhone during the early 2000s, the music industry took advantage of these new innovations. Music streaming companies like Spotify and iTunes took over the market and became the foundation for digital music and online streaming services. The gradual switch to digital media made it easier for any average person to access music and share it with more people.

The continuous surge of users in the apps made music executives promote their artists even further and invest more money into advertisements to boost their popularity.

Individuals that are pursuing music as a career but don’t have access to a marketing team, still receive lots of feedback and support from users on the social media platform. Short audios that they create can go viral, leading to their success in views and publicity.

TikTok only became popular in early 2018 and completely changed the way people listened and shared music. This revolutionary app showed the music industry and the world that our devices are becoming more interconnected with people and the artists that are given promotions.