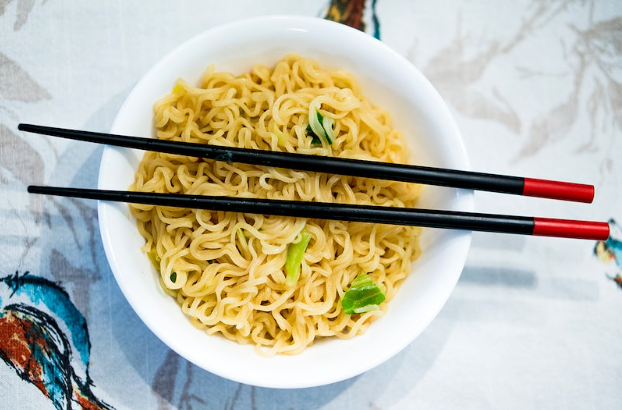 You’ve had a pretty busy day. You just finished school, and you have an hour before you have to go to soccer practice. You run to the supermarket and find the perfect snack: instant ramen. But there are three brands. Which one do you choose?

Nongshim, Cup of Noodles, and Maruchan are some of the most popular instant ramen noodles in the world, but which one is the best?

Three of my friends and I tested all three brands to determine which ramen we liked the best. As to have the most accurate results, all ramen flavors were the same: chicken.

Here are our results.

Nongshim noodles were the first ones that we tried. According to the New York Times, the brand is one of the best in the world but with this certain type of Nongshim, Bowl Noodle, “the noodle texture is very different from other NongShim types I tried. They’re thinner and taste wheatier compared with the other, more elastic ramen noodles”.

I was a little surprised because I’ve had this soup before and I really liked it.

It has really big portions and a variety of flavors, such as Hot & Spicy, Shrimp, Kimchi – my personal favorite- Beef, and so many more.

This one was spicy and the other ones weren’t, which I think either makes people really like it or just hate it.

Valentina Haufelk from United Nations International School said, “[Nongshim] was a bit spicy which made it hard for me to eat because I have a terrible spice tolerance.”

Whereas my other friend, Nik Baker from Xavier high school, really liked it because “it was spicy and it gave you a little kick in your throat.”

I also really liked this one because of the spiciness. It made it more tasteful.

I’m also pretty biased towards this soup because last year, almost every day after school, I would have one of these. These became my comfort snack. I would have them for lunch, dinner, a quick snack before my afterschool programs, and a quick snack to tie me over until dinner.

One of the biggest cons of this soup is that it has the highest sodium levels -1520g – out of all three brands. Too much of that sodium intake can cause all sorts of health problems I don’t want to scare you with. So maybe for this soup, I wouldn’t eat it as much as me!

Maruchan noodles was the one we tried next. It was by far everyone’s favorite, which surprised me because in the article, Mashed by Samantha Maxwell, she put it at the eighth ranking out of eleven because, “the noodles are of a low quality, and the overall dish is just too salty to truly enjoy.

Which I completely disagree with.

It really just had the strongest flavor and the best taste.

The noodles-to-broth ratio was equal which, in my opinion, is very important.

The soup also had “like a sort of sweet, distinct flavor. Which made it really good and memorable”, said Theo Sheridan-Vitale who also goes to Xavier high school.

I think the biggest con about this one is the portion size. It’s pretty small, and, compared to the Nongshim, doesn’t fill you up as much, which could be good if you just want a light snack.

Another aspect is the material in which the soup is held is not strong enough, and it would collapse in itself – causing me to almost spill it multiple times while I was carrying it.

But out of the three brands, Maruchan has the lowest sodium, which is definitely a big pro because, although it is a lot of sodium and eating it too much could take a toll on your physical health, it’s still much better than the other ones. And eating too much of anything is unhealthy.

In my sixth grade after-school, they used to serve them to kids. It was always the most exciting thing when you bought one, waited for three minutes, and opened it to have this fancy snack.

I remember me and friends would always gawk over them. They were the most delicious things ever.

So imagine my surprise when I tried this one and it tasted the worst out of the three!

The soup just looked bland. The noodles were like paper white, and the broth had practically no flavor.

“It was pretty plain and just like, not very good. It tasted very cheap,” said Nik.

Valentina said, “The other one was a bit spicy so it was like I couldn’t really eat it cuz I feel terrible spice tolerance… but at least I  liked the flavor, you know what I mean? The cup of noodles just didn’t have like a lot of flavor. It was pretty bland and just not fun to eat.”

I have to agree with both of them. Cup of Noodles, despite its fame, was pretty bad. And to be fair, yes, all instant noodles are not healthy, but the other two had better quality and flavor. Cup of Noodles had neither.

In all interviews after we had finished the experiment, all ramen was eaten except for that. So do what you want with that information.

Cup of noodles does have a pretty high sodium percentage as well. Almost as much as Nongshim. And if you’re going to be eating something so unhealthy, it might as well taste better.

Now without further ado, here is our ranking:

In first place we have: Maruchan

In second place we have: Nongshim

And in last place we have: Cup of noodles

If you want a light snack, go with Maruchan. If you want more of a meal, definitely go with Nongshim. But whatever you do, don’t choose Cup of Noodles!