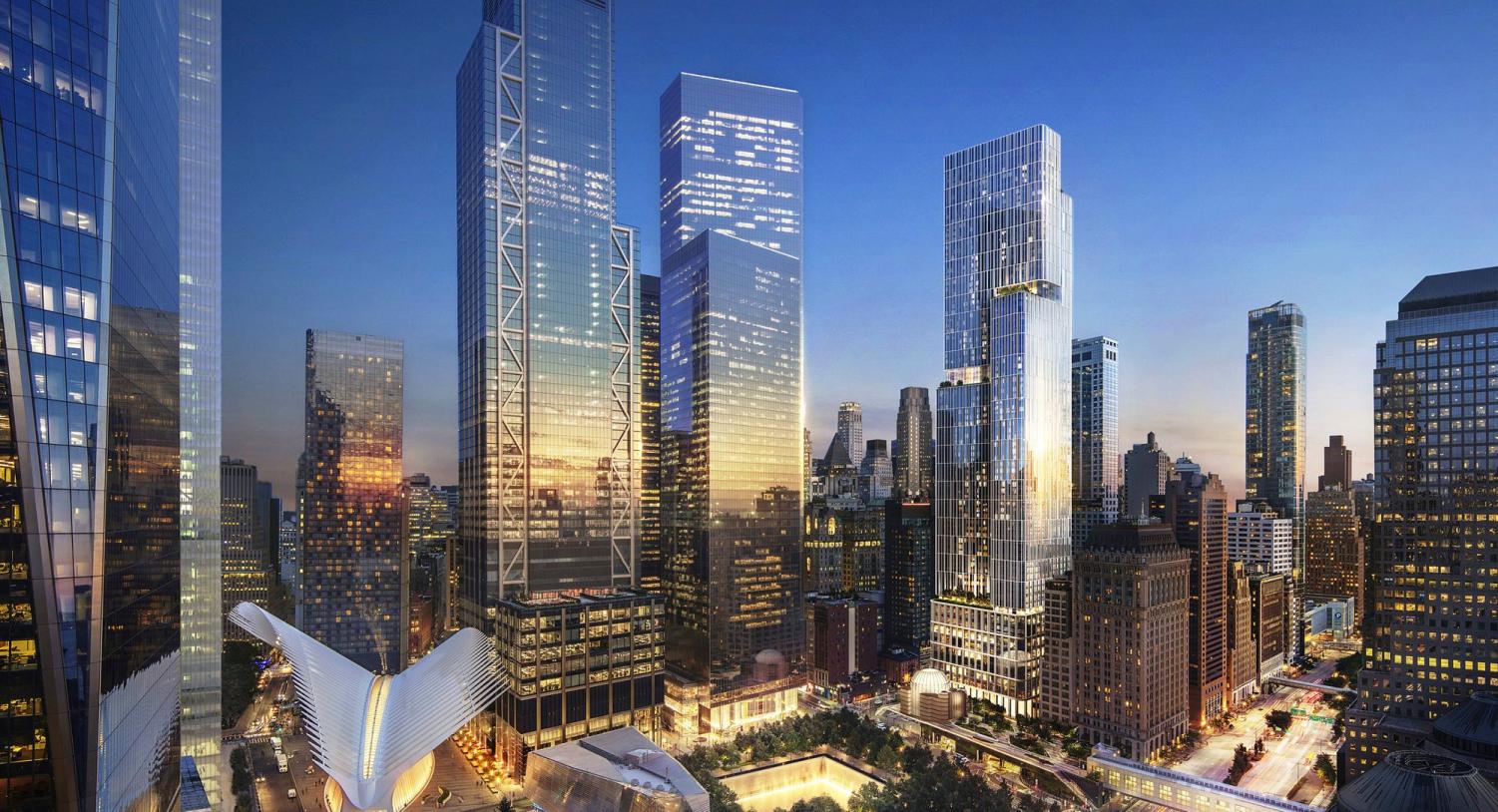 Concept image of the completed World Trade Center complex. From left to right: One WTC, Two WTC behind tower one, The Oculus, Three WTC, Four WTC, and the planned Five WTC. Credit: KPF

Concept image of the completed World Trade Center complex. From left to right: One WTC, Two WTC behind tower one, The Oculus, Three WTC, Four WTC, and the planned Five WTC. Credit: KPF

This article was originally published on NYU’s The Spectrum.

On the corner of Cedar and Greenwich, lays the bare plot that’s expected to host the future 5 World Trade Center. The new tower is expected to provide 1.2 million sq. ft of residential units. Twenty-five percent of the proposed 1,325 residential units, or approximately 330, will be designated as permanently affordable.

“That’s not enough”, according to Jill Goodkind, A co-founder for 100% Affordable 5WTC. An advocacy group that aims at making the planned 5 World Trade Center 100% affordable housing.

Goodkind has been living in Lower Manhattan since 1989. “It was way less expensive to live down here than in the East Village. There was a certain amount of affordable and rent-stabilized housing here too.” During her 30 years of living in the neighborhood, however “all these thousands and thousands of affordable apartments have disappeared” as she puts it.

Buildings such as the Independence Plaza, Celbridge Towers, and Gateway Plaza, have changed drastically in the past twenty years. They’ve gone from being quaint, family-oriented, rent-stabilized units, to these revamped, overpriced, and unobtainable luxury apartments.

Goodkind links this change in housing to 9/11. “Post 9/11 there’s been this idea to rebuild better. So when the World Trade Center site was being rebuilt, it was rebuilt using federal money, but all that was built were all these expensive housing units for the rich, and leaving the scraps for the poor”

The fight for affordable housing doesn’t just involve building new units, it also involves preserving the ones we already have. Just two blocks away lie 109 Washington Avenue. The fight to stay here has been brutal.

“It’s been quite an ordeal,” said Esther Regalson. She’s been living there for 38 years. There are sixteen studio apartments in the building. “It’s small, yet cozy. You can even see where the old tenement bathrooms used to be”

Svehlak, whose family’s history in the US started on the streets of Lower Manhattan, talked about how a lot of immigrants who lived in the tenement houses went onto leaving the city, in search of somewhere a little nicer “There were those however, who chose to stay. They could walk to work, they could walk to Battery Park, they had the Washington Market right under their noses.” The sort of benefits that allowed for a vibrant community to flourish

That once vibrant neighborhood had been long gone by the time Regalson moved in.

“When I moved into the neighborhood in ‘83,” said Regalson, “this area was not a neighborhood anymore. Through all these acts of eminent domain, we became this sort of cul-de-sac of remaining people” Life-long resident Eddie Metropolis agrees with Regalson sentiment

He’s seen the changes firsthand, “…From an ethenic melting pot, to total gentrification of various ages” says Metropolis. He recalls hearing the constant explosions during the construction of the World Trade Center. Round-the-clock work as he calls it. Hearing TNT blasting day-in and night-out, the engines from the trucks roaring on those empty streets “I was a little kid, to me it was exciting, it didn’t bother me one bit. As an adult now, would I have wanted to deal with that? No. It was a quality of life issue.”

Svelak adds that he’s “…got some experience of seeing things change, I’ve walked the streets of the World Trade Center before it was even thought of, what used to be down there were these factories, tenements.” The neighborhood now is filled with offices, and apartments whose rents were nothing like the tenements which predated it.

Metropolis goes on to say “where the WTC is now, was once where my friends lived in tenements. They were forced out due to eminent domain.” Those who remained during the construction struggled a lot. “It took a considerable period of time, and due to the fact that the surrounding areas had to be closed, you had businesses and residents move out in droves.” With all that remained was 109 Washington, and a cluster of other tenements that have since been removed.

“The rent is too high, and rich people have their pierre-du-ters that they don’t even live in. what I call in yiddish a ‘Shanda’” Regalson says “The people who can afford to live here today with these rents don’t care about the neighborhood. We fought for the neighborhood after 9/11. We fought to have our neighborhoods back, to come back to our homes, and now we’re being priced out!”

That drive is what brought Regalson to join 100% Affordable 5WTC. As Goodkind says “I always say that 9/11 made activists out of all of us”

Goodkind describes the plans that current developers Silverstein Properties and Brookfield Properties have for 5 WTC “The city forces all new buildings to include mandatory inclusionary housing, the developer agreed to 25% affordable units, but we don’t need anymore luxury units. To make 75% of that building to be built as unneeded luxury on this public land, it’s a battle.”

Regalson adds on “To say that it’s not justifiable to make this tower 100% affordable is just short sighted and only thinks about profits. It doesn’t take into account the viability of living in the city, and supporting citizens who have every right to be there despite their income.” Citizens which include 9/11 survivors, first responders, people who worked on the pile, and residents who came back after the attacks.

Whatever the developers end up doing with 5 World Trade Center is yet to be determined. In the eyes of Goodkind, Regalson, and the local politicians and advocates who do work with ‘100% Affordable 5WTC’ however, it’ll be a slap in the face if they build another unaffordable highrise, in a market no local could afford.