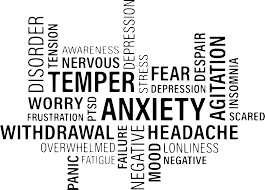 The correlation between stress and depression

Stress is a feeling everyone experiences sometimes; you know that feeling when you have a huge assignment due the next day and you forgot about it. For some people, they experience a lot more stress than others. They feel stressed when they transition to new activities, or they miss some days of school because they feel hopeless.

But these people can’t ever stop feeling like this, so for them they need treatment to get better. These people have depression.

Is stress connected to depression? According to an article in Very Well Mind called “Common Causes Of Depression” written by Nancy Schimelpfening, there is a hormone secreted during stress called cortisol. High levels of this hormone can cause depression.

What is cortisol? Cortisol is made in our adrenal and pituitary glands; it is usually known as a stress hormone because of its role during stress, but it is not only a stress hormone. It also is used in memory formation, metabolism regulation, and inflammation reduction.

How does cortisol work? According to Adrienne Santos-Longhurst,“Stress triggers a combination of signals from both hormones and nerves. These signals cause your adrenal glands to release hormones, including adrenaline and cortisol. The result is an increase in heart rate and energy as part of the fight-or-flight response. It’s your body’s way of preparing itself for potentially dangerous or harmful situations.”

She also says that “Cortisol also helps to limit any functions that aren’t essential in a fight-or-flight situation. Once the threat passes, your hormones return to their usual levels. This whole process can be a lifesaver.”

But when you’re under constant stress, this response doesn’t always turn off.

In the article high cortisol symptoms written by Adrienne Santos-Longhurst, she writes, “Long-term exposure to cortisol and other stress hormones can wreak havoc on almost all of your body’s processes, increasing your risk of many health issues, from heart disease and obesity to anxiety and depression.”

Cortisol may have an impact on depression, but it is not the only factor that determines depression. Based on several interviews, iSchool students believe that stress triggered their levels of depression.

For most of them, they said that transitions like going into middle school triggered their first occurrence of depression. Transitions are hard to deal with. If you have ever moved into a new house or apartment, you know how stressful it is to start in a new place.

One iSchool student says when they transitioned to middle school, everything just fell on them. It puts them through a huge amount of stress, and they couldn’t handle it.

Another iSchool student said that they had separation anxiety; they constantly wanted to be with their parents in 5th through 7th grade. “I have separation anxiety. It was constantly wanting to be with one of my parents which I can’t have and I couldn’t function at school and I couldn’t function at home and it just got to this point where it was overwhelming.”

They said the trigger was when their parents went away to their uncle’s surprise party overnight, and their grandma was going to stay with them; for them this triggered a 3 month spiral of depression. With this information, we can conclude that transitions are stressful, and for some stress can lead to depression.

Another factor in teen depression is school pressure. School pressure affects us all at some point in our lives. High school students are worried about their grades and assignments because they determine what college they can get into, and this can impact the rest of their lives.

According to Patti Neighmond in her article “School Stress Takes A Toll On Health, Teens And Parents Say,” “Almost 40 percent of parents say their high-schooler is experiencing a lot of stress from school, according to a new NPR poll conducted with the Robert Wood Johnson Foundation and the Harvard School of Public Health. In most cases, that stress is from academics, not social issues or bullying, the poll found. (See the full results here.)”

This proves that when students are experiencing stress, they are more likely to be getting it from school rather than social issues or bullying.

One student from the iSchool said that they were doing well in the summer, but when they went back to school it “all came crashing down on them.” They went on to say that “stress is really hard on me, especially if I have a lot of work. Because there is more pressure on me to do more work, it’s all linked, everything.”

This can turn into an endless cycle for students who are depressed, the stress elevates depression, they get more stressed, and they miss more work, which causes more stress and consequently more depression.

They were very stressed about school and they couldn’t function because of the stress. According to an article written by Margaret Shapiro she writes, “U.S. teenagers report feeling more stressed-out than adults do, with school being a main cause, “The survey of 1,018 teenagers, ages 13 to 17, and 1,950 adults was conducted online last August and found many teens reporting being overwhelmed or depressed because of their high-stress levels. Fully 83 percent of teens said that school was “a somewhat or significant source of stress.”

The article went on to say, “Twenty-seven percent reported “extreme stress” during the school year, though that number fell to 13 percent during summer. And 10 percent felt that stress had a negative impact on their grades.”

It turns out that social media isn’t just for fun – it can increase your chances of getting depression. According to Caroline Miller in her article for the Child Mind Institute, “In several recent studies, teenage and young adult users who spend the most time on Instagram, Facebook, and other platforms were shown to have a substantially (from 13 to 66 percent) higher rate of reported depression than those who spent the least time.” This means that there is a correlation between social media and depression.

What is the correlation? Well, there has been no scientific connection, we just know that when you use social media the chance of you getting depression goes up. What should we do when we can’t prove something with science (yet) but we can prove this with data?

In an article written by Joe Sugarman “The Rise of Teen Depression,” the author suggests that when smartphones were introduced, the rate of depression rose sharply among teenagers. He also says, “The odds of adolescents suffering from clinical depression grew by 37 percent between 2005 and 2014, according to a study by Ramin Mojtabai, a professor at Johns Hopkins Bloomberg School of Public Health.”

During this period, Facebook became available to the public in 2006. The iPhone was released in 2007. Instagram started in 2011. When these apps were released, the rate of depression in teenagers rose 37 percent, which could mean that there is some correlation between social media and depression.

Some experts are wondering why social media can lead to depression; there are many suggestions. A few examples included not socializing in person, and perceived isolation from their peers. Perceived isolation is when people have a fear of missing out on things like parties or hangouts with friends.

One anonymous student said,, “You see on social media that people have these, like, perfect lives and you start to critique your own life.” What this could mean is that there is a pressure to fit in, to be perfect.

There is a reason why teenagers want to fit in, according to Elfy Scott in his article in Vice. He writes, “Numerous studies have found that teenagers use different areas of their social brain than adults when they’re faced with basic emotional stimuli. Teens rely more readily on the medial prefrontal cortex, the part of the brain that processes the mental state of other people as well as mimicry (hence the copy-catting). The teenage brain is obsessed with what others are thinking.”

This means that teenagers constantly want to fit in. This could be the reason why teenagers who go on social media have a higher chance of being depressed. They want to fit in with the people who have these supposedly “perfect” lives. When they compare those peoples lives to their own, they feel like they aren’t fitting in at the slightest difference.

Even though depression is a huge problem, some people can’t even afford to treat it. One person said that they got a test to see if they were depressed, they said after that they might have depression and for them to come back later. They couldn’t come back because their insurance wouldn’t be able to cover it.

The National Institute of Mental Health writes, “Well-meaning friends or family members may try to tell someone with depression to “snap out of it,’just be positive,’ or ‘you can be happier if you just try harder.’” But depression is not a sign of weakness or a character flaw. Most people with depression need treatment to get better.”

According to Steven Reinberg in his article “Almost One in Five Americans Going Without Healthcare,” he writes, “Almost 20 percent of Americans, or more than 40 million adults, can’t afford or access needed health care.”

America is supposedly a promised land where people can afford everyday necessities, but the fact remains that a large group of people cannot afford medical treatment. It gets even worse.

According to Sy Mukerjee in his article “STUDY: Americans Just Can’t Afford Mental Health Treatment,” “While 15 percent of Americans suffering from AMI cited inadequate insurance coverage as their main obstacle to seeking care, a staggering 50 percent said that mental treatment costs are simply too high.” This is bad because people who need treatment for depression, can’t get it.

Another reason people don’t seek treatment is the stigma around the disease. This prejudice can cause people to avoid seeking treatment for depression because they might face discrimination and ridicule for not “toughing it out.”

An iSchool student said that their mom also had depression. If you have a relative who has or had depression, your chances of getting depression can increase.

According to Nancy Schimelpfening in her article “The Common Causes Of Depression,” she writes “You are more likely to experience symptoms of depression if others in your family also have depression or another type of mood disorder. While studies suggest that there is a strong genetic component, researchers are not yet certain about all the genetic risk factors for depression.” This means that we do not know for certain that genetics cause depression, but we can link depression to genetics with statistics.

Throughout the investigation, the various aspects of depression have been reviewed, but it all comes down to stress. For teenagers, stressors include life events such as transitions or deaths; social media and smartphone use; school pressure to get good grades and do all of your homework on time. Genetics also plays a role. If one of your family members has depression, you are 40% more likely to suffer from depression, too.

Depression is an impossible thing to live with. If you know anyone who is struggling with depression or suicidal thoughts please contact the national suicide hotline, 1-800-662-HELP (4357).