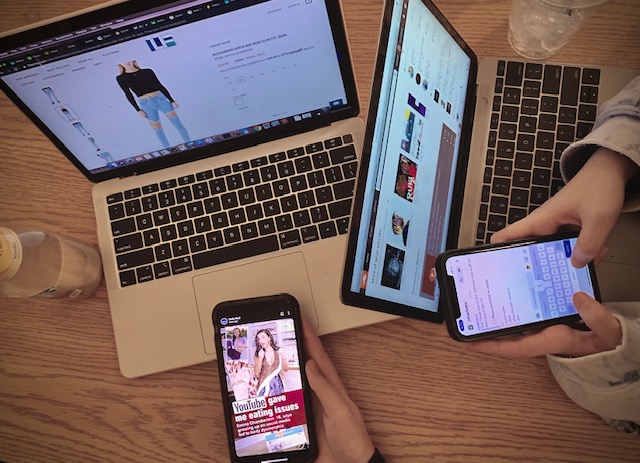 Phones are much worse than you think

You’re sitting in class, dozing off as your teacher continues her lecture on Westward Expansion. You’re so tempted to pick up your phone. The urge moves its way down from your brain to your limbs, then finally your fingertips, forcing you to just pick it up. Forcing you to feed your addiction.

You look through Snapchat, answer your text messages, and you scroll through some Instagram posts too. Before you know it, the period is over and you have no clue what happened during class or what the homework is.

The reality is that it’s impossible to multitask. Phones are a huge distraction to teens and are really only damaging to healthy brain development. This addiction to technology is much more serious than many could’ve ever imagined..

According to Harvard University, “We are not wired to multitask well, and using cell phones during class is no exception. Several studies have compared students who texted during a lecture versus those who did not.  Those who texted frequently took lower quality notes, retained less information, and did worse on tests about the material.”

Mr. Whittaker, math teacher, supports the Harvard study with his own experience in the classroom. “Students on their phone a lot aren’t engaged in taking down notes, they’re not engaged in talking to other students about math material and math concepts, they’re not working together to solve problems.”

Evidently, children are becoming much more distracted by technology usage and are not participating in as many social interactions.; This is one reason why their brains, especially young childrens’, are not developing as well as they should be. “A new study scanned the brains of children 3 to 5 years old and found those who used screens more than the recommended one hour a day without parental involvement had lower levels of development in the brain’s white matter — an area key to the development of language, literacy and cognitive skills.”

These young years are some of the most important in a child’s life. The first 5-8 years are those that set a foundation for future learning and success. “‘That’s when brains are very plastic and soaking up everything, forming these strong connections that last for life.’” Excessive technology usage over the course of these prime years can really disturb that foundation. The lower levels of white matter continue to negatively affect children as they grow into young adults.

Science teacher Ms. Brown validates this finding  by saying, “We know that using phones when you’re young can change your brain. If you’re on a phone, you’re not getting face to face interaction, and you’re not getting all the skills that you need.”

When one’s addiction to technology starts very young, it tends to worsen as they mature. Eventually, the urge for phone usage prevents students from absorbing all the material they should be learning in school.

The increase in usage of phones in the classroom has such a large effect on the knowledge students are obtaining, yet it doesn’t seem to phase them.

In a recent survey conducted at the NYC iSchool, the average student picks up their phone roughly 5 times in one 57 minute class period.

The students who use their phones in class do not learn as well as those who don’t. Ms. Brown says, “We can’t multitask and if you’re trying to use your phone and trying to look at something, then you are not learning and you’re not doing either task well.”

From freshman Camila Mora’s perspective, it is almost impossible to keep her phone out of her hands during class. Her attachment to technology comes from the fact that “it’s not boring” and it gives her “something to do all the time.”

This entertainment, positive or negative, is feeding her addiction to social media and technology. While in class, Camila goes “on Tik Tok or texts [her] friends or just [scrolls] on Instagram.” While Camila uses her phone, she doesn’t learn the topic being taught around her, her brain can’t absorb everything she wants it too.

While technology has a large impact during the school day, it has an even bigger effect at home. Firstly, homework. After a long day at school, one’s work is still never finished, and it has to be brought home. Majority of the time, phone and technology usage interrupts homework. A survey sent out to iSchool students showed that 88.6% of respondents pick up their phone at some point while they’re completing their work.

In addition, phone use also disturbs sleeping patterns. The device emits a blue light that has a negative effect on the  brain, altering your sleep patterns.

According to Sima Vazquez, a college student at Columbia University, “blue light activates parts of your brain and ruins your circadian clocks so that it takes you a lot longer to fall asleep at night.”

Teenagers need an average of 8-10 hours of sleep a night to work at their best. According to the National Sleep Foundation, “one study found that only 15% [of students] reported sleeping 8 1/2 hours on school nights.” That other 85% doesn’t get enough sleep to function properly.

It’s not only the phone itself that’s bad for you, but what’s on it too. Phones provide a way for people to ‘hide’ behind a screen and use their social voice and power as a way to cause harm to others. Camila said that, “one negative of social media is… cyberbullying.” When people get to hide behind screens, they feel way more powerful, and they don’t always use that in positive ways

All in all, technology is damaging to those involved with it. While there may be some convenience in technology, phones are a major distraction from real life, and not a very good one.

In order to slowly undo the damage, it is important to limit screen time. Start by keeping your phone out of the room when doing homework and keep it on silent and in your bag during class.

Also, try putting your phone away and out of sight at least one hour before you go to sleep! This is just a start to getting off the phone, away from an overdose of technology, and back to living in the moment so that we don’t continue to miss out on real life.