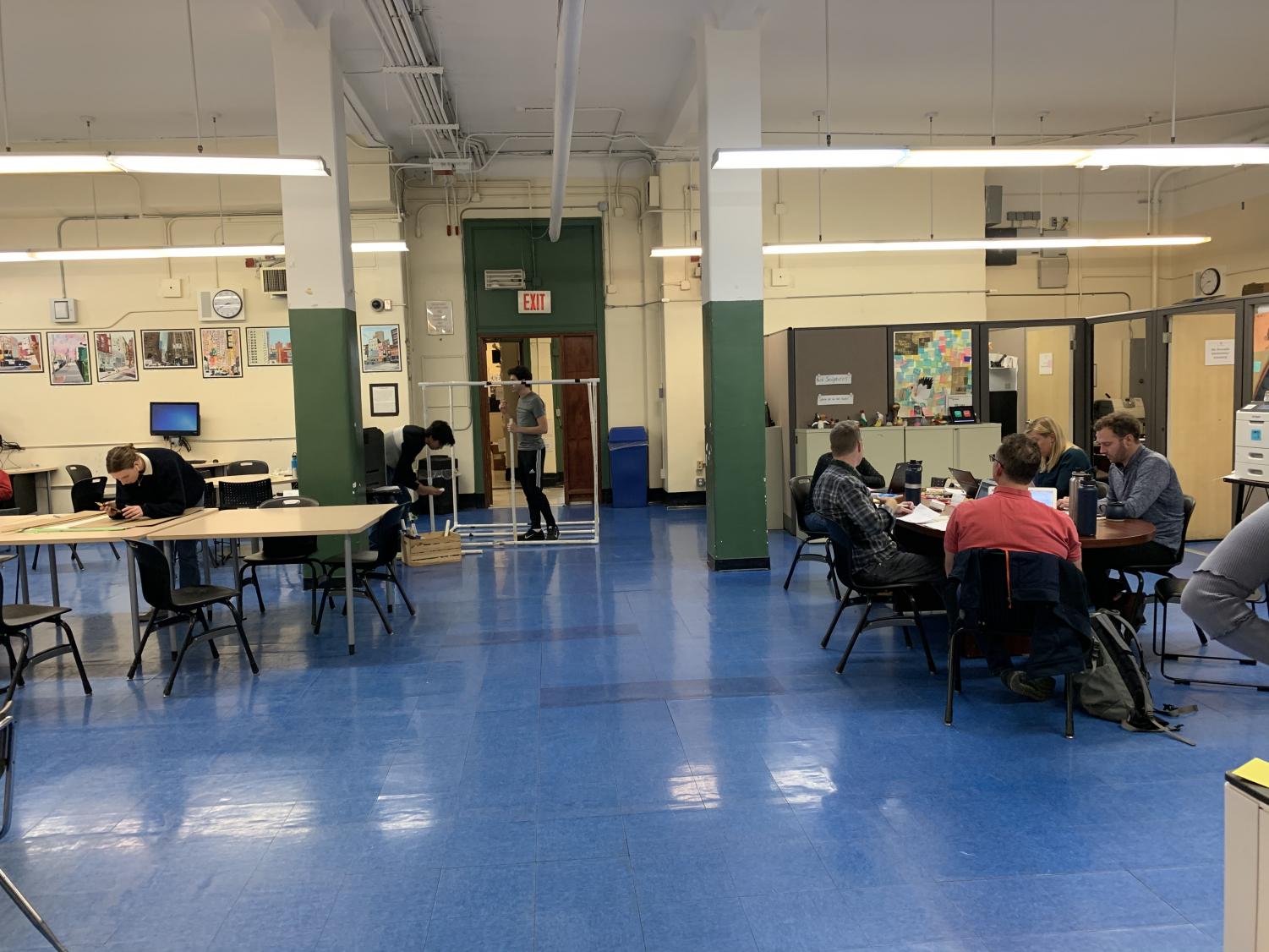 Does the student commons need to be more comfortable, or will it just make it more of a hangout spot?

It’s Monday morning, and after staying up all night doing homework, you find yourself stuck with more to do before your first-period class.

You rush up to the Student Commons to get started on your work, only to find a cluster of students chatting and having a good time right before going to class.

At the iSchool, the Student Commons is one of the biggest areas in the school for students to get work done, but depending on the time of day, it may not be as practicable as you need it to be.

Many students believe that it is too noisy, or not comfortable enough to get any work done, so they opt to just working at home. The Student Commons is already a popular area in the school, but having more of a quiet and comfortable area would make it even better, according to many students.

When surveying the iSchool, it was found that out of 24 students, 45.8% preferred to work in the comfort of their home.

Student Mia Davis, a senior, said she also had the problem of not being able to work because of the noise level. “ I don’t like how noisy and crowded it can be so I’d rather just go somewhere else.”

When talking to Geometry teacher Mr.Fitts about this problem, he suggested that maybe we could soundproof the walls of the Commons.

Although this is a good idea, it’s not very practical due to funding and the amount of time it would take.

The problem with the noise level in the Commons is that instead of being a place for work, it turns into just a hangout spot and only a hangout spot.

Students start to meet up with friends in the area and just turn what should be a peaceful place into a noisy and crowded environment.

According to “Noise is an increasing problem in learning environments,” Dr. De Andrade believes that noise in classrooms prevents and creates a barrier to efficient learning.

Ms. Leimsider, assistant principal, actually she says she loves the commons and how the founders viewed the area in a similar style to a student center at a college.

“While there are definitely times when I wish I had an office with a ceiling and actual walls, I enjoy having my office in a space where students can come in and out as they please.”

When discussing with her the idea of bringing in chairs into the commons, she begins talking about how when the school first opened up September of 2008, they purchased green chairs for the students.

She goes on by saying that after two years of having it, the Commons became really dirty to the point that there was a mice problem.

With this in mind, the rules that are already enforced for the commons could be kept while also having furniture. To this she said: “​I definitely think the fact that we don’t allow eating in the Commons will help ensure that any furniture would stay clean and I think that iSchool students would respect the space and want to make sure that the furniture remained clean.”

Students at the iSchool also said that they would chip in and clean up after themselves. This would be great for the environment of the commons community while also helping students learn to work for the things they want.

One anonymous student said, “I would make sure to clean up after myself and try not to do anything to damage the furniture and encourage others to do the same so that we can keep the space clean at all times and safe for everyone.”

Even with this, Ms.Leimsider still wasn’t sure if furniture would make the space more of a workspace or more of a space to hang out.

Despite the fact that this is true, there are ways to prevent this from happening.

The problem of clutter really only occurs before school or after, and it’s due to the lack of chair availability, but it’s also hard to make sure the Commons isn’t crowded in the morning because there aren’t that many places that students can go.

Because kicking students out of the commons when it gets packed is not a feasible solution due to the busy schedule of teachers and other staff, students will have to try to make sure they are not in the commons when they are not suppose to or disturbing others during times of work in order to keep the conditions of the area quiet and peaceful.

Sophomore Violet Lane also suggests that we make the commons a physical area for both work and leisure, “Yes! It should be half and half though- half desks and half couches.”

Some freshman haven’t spent enough time at the school to utilize the commons to its full potential with one anonymous student saying : “I’m new so I haven’t experienced it as much as others but for now I think it’s good”

Wikipedia believes that “Student lounges are rooms located within thousands of schools, colleges, and universities, designed to give students a space for relaxation and study,” and when looking at our area this is true.

Many students appreciate the opportunity of having this area, but  just wish that there was more of a variety of seating options, along with other minor improvements.

Freshman Chantel Bell, along with another anonymous iSchooler, believes that walking in the Commons in awkward and unforgettable.

Chantel says, “Definitely, couches would allow me to feel more comfortable and like I was at home.”,  “Right now when I walk in there, it’s kind of sad and gloomy.”

The student commons is an area with so much happening whether it is a school event or just the everyday transition of students between classes.

All students would love to relax, be comfortable, and just take a break at school but having furniture is a big jump ahead.

If comfortability and couches are what students want in the commons, it has to be shown that we are old enough to understand that there is “a time and place for everything.”