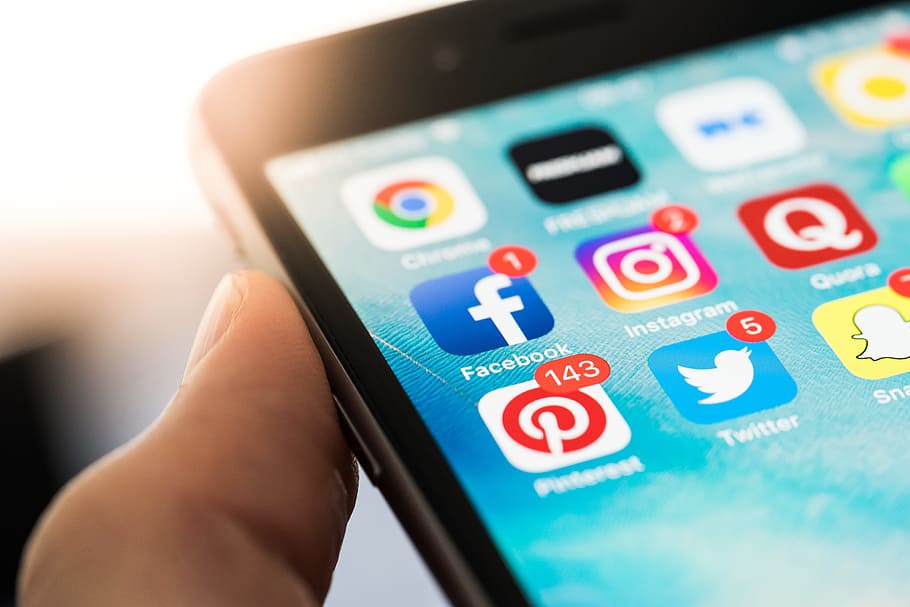 Does social media do more harm than good?

It’s a Saturday evening as you walk along the streets of Manhattan. You run down the steps of the train station as you hear the train coming. The station is crowded with people, and you manage to push through them, only to have the train doors close on you. You wait a few minutes for the next train to arrive.

The train arrives and you step inside. You look around only to notice everyone’s head down looking at their cellphones. You see people aimlessly scrolling through apps like Instagram and Twitter for what seems like the duration of your whole train ride.

As you get off your stop and out of the station, you arrive at the restaurant waiting for your friend to arrive. You look around and see people’s heads in their phones, few actually talking with the person next to them.

Technology has advanced tremendously throughout the years. The internet has become a large factor in many people’s lives. Social media is one part of the internet that has impacted society in positive and negative ways. While it is used for business and communication, among other aspects, it has many negative impacts for those who use it, especially adolescents.

According to Newport Academy, an American therapy program for adolescents with mental health or addiction issues, “…frequent use of social media among teenagers and young adults has many less positive consequences. These include cyberbullying, negative self-image and body image, social media addiction, and less time spent doing healthy, real-world activities.”

For many teenagers, social media is a part of their lives. “A 2018 Pew Research Center survey of nearly 750 13- to 17-year-olds found that 45% are online almost constantly and 97% use a social media platform, such as YouTube, Facebook, Instagram or Snapchat.” The constant exposure to such platforms leads to a higher chance of having mental health issues, which can start small, but lead to more serious problems such as severe anxiety.

When going on social media, it can become very difficult to avoid making comparisons. People like celebrities, or even people you might know from school, are constantly posting photos or experiences of their life. Everything from physical appearance to the successes of others are posted online for anyone to see. Because of this, teens are more prone to comparing their lives or physical appearance with others, thinking that they aren’t as perfect, and having lower self-esteem and confidence in themselves.

Ninth grader Angel Gurung explains, “This famous person went to Hawaii, and I’m here studying, so I compare myself sometimes. At times, I do feel like what if I was them or I wanna be them.”

“Adolescence and the early twenties in particular are the years in which you are acutely aware of the contrasts between who you appear to be and who you think you are,” says Dr. Wick, a clinical and developmental psychologist. Teens may try to pretend to be someone they aren’t in order to fit in with a group. And the more time spent on this, the harder it is for teens to feel good and satisfied with themselves.

With such a large platform, cyberbullying can occur, impacting teens’ mental health. Since everything is online, people can use fake identities and hide behind a screen while posting rude comments on someone’s post.

“I feel like they’re jealous of other people’s lives and all the anger and frustration is used to hate on them,” commented freshman Angel Gurung.

In addition to affecting mental health, social media can be a huge distraction to students. It makes it harder for students to stay on task. The simple sound of a notification can interfere with a task. It’s very easy to start scrolling through social media with the intention of simply responding to a text, but by the time you know it, you’ve spent hours on your phone.

Harvard Medical School stated, “According to a 2018 survey by the technology company Asurion, Americans check their mobile phones an average of 80 times a day; the highest users surveyed topped 300 daily checks.”

In another survey, “80% of students agreed that using a mobile phone in class decreases their ability to pay attention.”

Especially with distractions in class, students aren’t able to retain as much information. Math teacher Mr. Whittaker agrees with how distractions impact students’ learning experience: “ If your head is buried in your phone and you’re scrolling through social media, you’re not going to be as productive and take advantage of your time. It’s clear to me that students who use their phones struggle more with productivity.”

Gurung comments on her experience: “When I watch one video or click on an app, I immediately keep watching, it’s addicting. It can get very distracting. I lose track of time so fast.”

Many students are more focused on checking messages on their phone rather than having meaningful conversations with the people next to them.

Mr. Whittaker comments on how life has changed since social media’s popularity increased: “When I was younger, you came home from school and then you either hang out with your friends in the neighborhood, play video games, or hangout with your family. Now, the fact that there’s social media, there is no idea of on and off.”

Furthermore, the excessive use of social media can affect the sleep cycle of teenagers. Sleep is more important than you think. Teenagers need about 8-10 hours of sleep in order to do their best. Without the right amount of sleep, you won’t be able to concentrate, make good choices, and engage fully in whatever it is you’re doing.

When looking through social media before you sleep, you not only lose track of time, but also have a hard time trying to sleep. “Having the phone close by during sleep can be disruptive, especially if your notifications are making sounds, flashing lights, or vibrating.”

According to the National Sleep Foundation, “Being exposed to bright lights can disrupt your natural sleep cycle.”

“The blue light that’s emitted from these screens can delay the release of sleep-inducing melatonin, increase alertness, and reset the body’s internal clock (or circadian rhythm) to a later schedule,” stated the National Sleep Foundation.

All in all, social media can be useful in teenagers’ lives, but it also has many possibilities in harming them.

Social media can affect one’s mental health, diminishing their self-esteem or causing anxiety and depression. The excessive use of it can disrupt students’ school life as well.

In order to minimize these things happening, teenagers should try to limit their use of social media. You can do this by setting a limit on your screen time and trying to keep your phone away while doing schoolwork.

It’s important not to get carried away on your phone, and interact with those around you. Take an hour break and live in the moment. At the end of the day, your health should always come first.