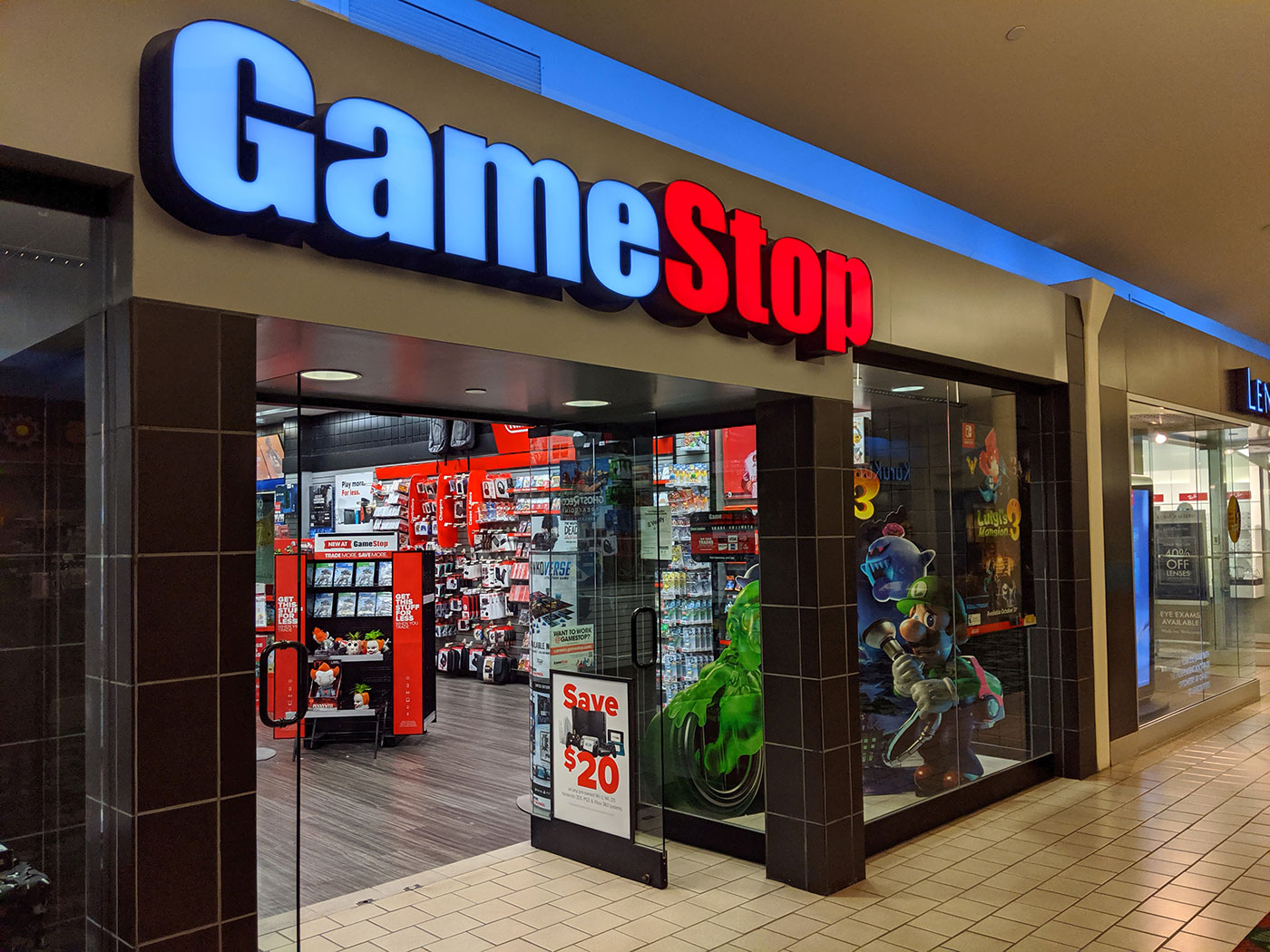 The full story behind the GameStop stock frenzy

Roughly 3 months ago, GameStop saw a massive 1,500 percent increase in its share price. This increase was fueled by small investors from sites like Twitter and Reddit. Many people began investing in GameStop because several hedge funds have been shorting its stock.

That is they borrowed GameStop stock that they sold on the market in the expectation of a price drop by the time they had to turn an equal amount of the shares borrowed to the party that lent it to them. Shorting a stock means that investors essentially bet that a stock is going to decrease in value; therefore, if a hedge fund shorted stock loses money, the hedge fund gains a profit, but if it ends up gaining money, they lose money.

The group that organized this mass buy is called WallStreetBets and is located on Reddit. The group was encouraging people to buy not only GameStop stock, but also stocks from AMC, Nokia, and Blackberry.

The reasoning is that if enough people buy a stock that is heavily shorted, the price increases and the short sellers are forced to cover their positions by buying more shares, which in turn further pushes the price up. The use of sites like Reddit and Twitter were instrumental to the surge in the stock price, and it soon led people who had never bought stocks before to start spending everything they had on GameStop stocks.

Social media is beginning to have a major impact on the stock market. Already there were some groups discussing stocks, but the market has never changed this much as a result of the activity in social media. Historically the market has seen various investors and traders trying to manipulate the system and drive stock prices up or down through the use of fictitious research posted on social media.

However, it had never occurred before that an increase in a stock’s value was achieved through an open and undisguised market manipulation where people were encouraged to buy stock, not because of any projected valuation or other financial consideration but simply to drive the price up as “revenge” to hedge funds.

Harrison Reinisch, an iSchool student who is very involved in the stock market, thinks that social media will continue to have a large effect on the stock market. “It already has been greatly affected by sites like Twitter and Reddit had a big impact on GameStop, AMC, and Nokia, so I see no reason for this to stop, especially since Facebook and Twitter are growing larger. Unless groups are regulated in the future this trend will keep going”.

This point is reiterated by Jordan Robertson, a junior at the Quest To Learn high school who says that “Unless the government begins regulating social media, which is unlikely, stocks like Gamestop and AMC are just going to keep spiking and surging in value.” It is extremely unlikely that any stock groups on social media are going to be regulated, so there is really no stopping groups like WallStreetBets from organizing mass buying.

There is also some worry that the people who began buying stocks due to GameStop are being influenced and manipulated. Ethan Thunder, a Junior at Baruch Highschool, says that “Social media can affect the market by influencing people to invest in certain stocks, and the same tactic could be used by companies themselves to create a trend of buying stocks like what happened with GameStop.”

In fact, famous people are already influencing people into buying not only stocks but also cryptocurrencies. Elon Musk is one of the most notable celebrities to speak in support of buying GameStop’s stock and voiced his support for the cryptocurrency Dogecoin, as well as the more famous cryptocurrency Bitcoin.

The stocks that were bought in mass were all shorted by hedge funds, which is why so many people purchased them. Many people feel that hedge funds are unethical and immoral, and that was the driving force behind the surge.

There have been many questions on who started the GameStop mass buy, and some have theorized that it may be from GameStop stock owners trying to gain a profit, or hedge funds, and even GameStop themselves. It’s possible that in the future a corporation or hedge fund could attempt to replicate the Gamestop surge in an attempt to gain a profit. According to Wall Street Journal, some hedge funds made as much as $700 million thanks to the GameStop surge.

All of these events have raised the question of how will what we saw with GameStop affect the stock market as a whole in the future. Al Birnbaum, a junior at the Quest To Learn high school, thinks nothing will change: “Many wealthy investors and hedge funds don’t like to see the market rising too much, and when it does many try to force it down and make things more in their favor. Plus, the entire stock market won’t be influenced by only one stock, it would take a lot more for there to be any actual change.”

The site that many people are using to purchase their shares is called Robinhood. However, Robinhood was forced to stop trading for Gamestop and AMC, and other “volatile” stocks. Many people were outraged by this and suspected that they were pressured into this by hedge funds or GameStop’s competitors since they were losing upwards of millions of dollars. This led to many people leaving Robinhood and switching to its competitor, WeBull.

Surprisingly, there was opposition to this from both Conservative and Liberal politicians like Alexandria Ocasio Cortez and Ted Cruz. This surprised many people and showed just how much of a bad move it was on Robinhood’s part. There were even threats of lawsuits and hearings on the issue.

Though according to CNBC, It turns out that Robinhood was essentially forced to stop trading because of NSCC (National Securities Clearing Corporation) regulations requiring that it posts collateral, that is cash, to ensure that the trade of its clients is in fact executed. Many people have come up with solutions that could comply with federal regulations, but at the same time let trading continue.

This led to a massive increase in people buying stocks and joining sites like Robinhood and WeBull. Many people are split on the issue, like Harrison Reinisch who said, “I think it’s very much a double-edged sword, on the one hand, the stock market is a great tool for making money, but only if you are smart about it. I’m not sure people who got into stocks because of GameStop are going to be very smart about it. Gamestop was a very bad stock before, and was a dying business, and had a poor brand reputation and it would be very bad if people who have never invested in the stock market and don’t know much about it are buying bad stocks and guessing which are going to go up is going to make them lose a lot of money.”

Due to GameStop, many have been investing quickly, and at times, blindly. A New York Times article details individual people, like one named Shawn Daumer, who at some point was gaining nearly half a million dollars from GameStop, but ended up holding it too long and eventually, sold it at a “mere” $65,000 profit. He sums up the situation many are seeing:  “It’s follow the trend, you know? If that’s the trend, follow it and it makes you money”. Fausto Rosado iterated the same idea, saying “It’s bad because people did not understand the risk of stocks, and just assumed GameStop would keep rising. It’s like they were hopping on a trend”. Many people though, were not as lucky as Shawn.

For example, Nora Samir invested $735 into GameStop, but because she believed it would continue to go up, she held them for too long and ended up losing more than half her money. So many lost money by selling too late or buying too much, to the point where entire savings accounts were wiped out in order to buy stocks.

A common hope that WallStreetBets perpetuated was that GameStop would reach $1,000 a share, which led many investors to hold on to their stocks for as long as possible, but since GameStop never reached $1,000, many people got burned by waiting too long.

Junior Eli Swift sees all of the new GameStop investors as a bad thing: “I think it’s a bad thing because many inexperienced people are spending a lot of their money on stocks, which they don’t fully understand. So much money has been lost because of inexperience.”

With all of the press GameStop has been getting, one could assume that the company executives would be attempting to gather support for WallStreetBets, but that is not the case. As of the writing of this article, the CEOs of AMC, BlackBerry, and GameStop have said nothing about the surge in their stock prices.

This is quite strange since according to Fortune the shares owned by the CEO of GameStop are now valued at over $1 billion. GameStop has seemed to go out of its way to ignore and disregard everything surrounding its stock price, even when it dropped back down to its original price.

AMC did the opposite and publicly proclaimed that it was using the extra money from its stock surge to make sure it avoided bankruptcy, which it blamed the COVID pandemic for). With the AMC CEO Adam Aron saying “Any talk of an imminent bankruptcy for AMC is completely off the table”.

As of the writing of this article, GameStop shares have surged twice already, and there is nothing to stop them from surging again. Most people believe that the GameStop surge was not a one-off event and that it will keep on repeating.

Sam Snediker from Clark University thinks that “The GameStop phenomenon has brought more interest and attention towards the retail trader, it was previously an undervalued and underestimated group of investors. Furthermore, I think it has inspired interest in investing for many young, previously unknowledgeable people, which could result in a shift towards an understanding of the importance of capital profits within the younger generation. Likely this will lead to a greater inflow of currency as well as more investors throughout the market as a whole”.

It will take some time to see if any changes in the investing approach by people following social media trends will cause a change in the market structure. One thing, however, is apparent: social media caught the attention of Wall Street and proved that it can inflict serious damages.

The full effects of GameStop and WallStreetBets are still unclear, but it’s extremely likely that something similar will happen again.

It may not include GameStop, and maybe it won’t be for the same reasons, but it seems like people on the internet have found a new way to voice their concerns and discovered a way to “fight back” against hedge funds and other financial institutions that had been shorting stocks and manipulating the market for so long.