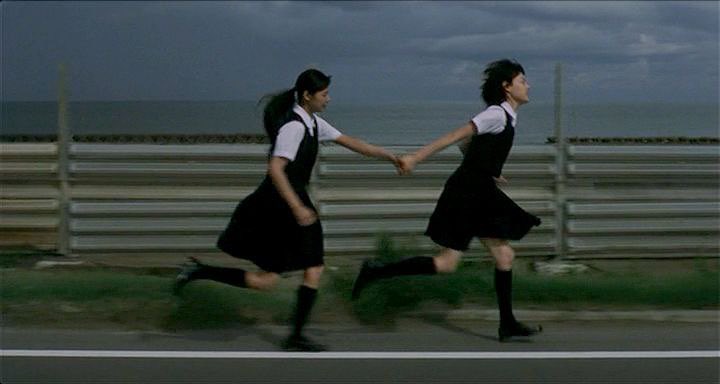 Endo and Kirishima running alongside a road near the end of the film.

Endo and Kirishima running alongside a road near the end of the film.

For students raised and educated in what is ostensibly the most urban city out there, New York, a return to a more naturalistic focus is maybe just what we need. There’s the classics, “Grapes of Wrath” and “Anne of Green Gables,” maybe even Studio Ghibli movies, including “Only Yesterday,” “My Neighbor Totoro,” and the like. Yet, I’d like to point to a less discussed film that delivers on the promise of hypnotic naturalism with a resoundingly emotionaland quiet sentiment: “Blue” (2001), directed by Hiroshi Ando.

Set in a rural and small seaside town, the film focuses on high school senior Kirishima, a noticeably quiet girl who captures the general energy of the film: muted, still, and introspective. Kirishima finds herself captivated by the mature, secretive, and somewhat shunned Endo, and the two grow close over the first 15 minutes of the film. After a characteristically quiet beachside mutual love confession, the plot begins to pick up speed (marginally.)

If you want to go in blind just skip this next paragraph, spoilers ahead!

Things are complicated when it’s revealed that Endo had an abortion last year, carrying a married man’s child. Afterwards, she was suspended from school for sometime, before returning this year to join Kirishima’s class. Just before summer, Endo suddenly disappears with no explanation, and when she returns she tells Kirishima that she had gone off to spend time with friends. Kirishima, however, knows that Endo went to see the married man, and Kirishima comes to understand that “l always come second. You [Endo] broke up with him, so the number-one slot is vacant. When he comes back, you’ll put him there. But you’ll always be the one I love the most.”

“Blue” is a quirky movie; it has its own language and expects the audience to pick up on it. It’s an extremely deliberate film. Every action it takes is for the purpose of something else, and there are various elements that make it so unique. I’d like to dig into these individual factors and begin to peel back the layers of this uncompromising film.

First of all, the film is set at a glacial pace, and everything is slow. The actors’ movements, the pronunciation of lines, even the plot. The camera itself doesn’t even move except for specific, weighty moments, and when it’s done, it feels so deliberate and heavy that it imbues the moment with that much more emotional weight. In many ways, it calls back to 70s exploitation horror movies. Obviously, “Blue” is not a horror film, and it was made nearly 30 years after the movement, however, a lot of scenes feel like they came from 70s exploitation horror. The ones that come between the most gruesome and transgressive things you’ve ever laid witness to, the ones that build that silent, thick, trademark tension. And yet, in place of tension, there’s only a building emotional climax.

Then there’s the music, which is one of the most stellar aspects of the film. Composed by Otomo Yoshihide (who you may know for his work on “Lupin the Third”), it’s a unique score that can best be described as playful. It almost exclusively centers around one leitmotif that takes various distinct forms throughout the movie, but generally bounces between a spirited acoustic tone, and a more grungey, shoegaze-y mood. There’s a lot of recorders, a lot of acoustic guitars. It should feel out of place in such a somber movie, yet it serves to add a bit of whimsy to the proceedings. At the end of the day, this is a movie about teenage love, one of the goofiest genres out there. It’s a movie about something fleeting and impermanent, and the airy nature of the compositions acknowledge this impermanence with a wry smirk.

Finally, there’s the dialogue, or more aptly the lack of it. Blue leaves a lot of things unsaid and opts to imbue the emotion and messages into the movie itself. Each line of dialogue has a very specific role in the movie, each conveying something important. The film breathes instead of speaking; it almost exclusively presents facts through dialogue, feelings and thoughts that are only shown through other aspects of the movie. This lack of communication could be why everything other than dialogue has such a heavy focus.

“Blue” is a movie of specificity, without the crutch of dialogue it’s pathos is instead rooted in the film’s own details. But the issue at hand is whether or not the movie can pull off these eccentricities well. At the end of the day, is it a good movie? The answer is multifaceted.

In its own weirdness, “Blue” goes against what we’ve been culturally taught to enjoy as an audience. It lacks the spectacle and familiarity of a city, the humor is hidden under layers of melancholy, its excruciatingly slow, in a way it feels like the primordial sludge that modern-day movies like “Nomadland” “Portrait of a Lady on Fire” and “I’m Thinking of Ending Things” evolved from. I think those movies have learned how the popular audience enjoys quiet movies, and to an extent make themselves more palatable to us, which isn’t necessarily a bad thing but forces us to question our influence as the audience.

“Blue,” on the other hand, is uncompromising in its objective. It’s not hostile towards the audience, but instead has an air of ambivalence. Honestly, if there is a modern incarnation of “Blue” from what I’ve seen, I think it’d have to be “The Lighthouse,” kind of a peculiar pick, but both films hold that air of uncompromising artistic objective. Throughout watching, I was almost expecting some kind of transgression. It’s a concession you often have to make with these kinds of movies, but there isn’t really much to speak of. Thus, it’s position in the wider canon of lesbian media from the 90s is once again rather unique.

You can’t really be objective about art, but as a lover of the most bottom of the barrel trash as long as it has a sincere artistic motivation, I think this film pulls off its oddities with flying colors. With emotion being imbued into every second of this film, it has a heightened emotional presence that seeps into every frame. “Movies in rural settings tend to put more focus on the characters and their lives,” says iSchool Film club advisor and Reel Global History teacher Ms Barber. “The acting and plot is really important in these types of films because the open setting will put more emphasis on what is happening and who is involved,” and that focus on a more introspective, character-driven focal point is especially potent in “Blue”. It conveys a really specific kind of sadness, listlessly endlessness, sorrow so familiar it’s almost comfortable.

Because the characters’ emotions don’t end with lines of dialogue, emotions are stretched out across the film, and it feels achingly realistic. “Directors like Alfred Hitchcock and Martin Scorcese are considered heroes of filmmaking because they specifically, and carefully, tried new things in their films, and it worked,” says Ms. Barber. All this to say, strange and outlandish techniques often give way to unique and moving art.

That afformentioned realism is also conveyed through “Blue”’s presentation of a queer relationship. Before examining this further, it must be aknowledged that lesbian representation from Japan is generally complicated by a concept called “Class S.” This goes about ten untranslatable layers deep, and I dont really have the capacity to fully explain it, but it can generally be classified as an inclination to perceive young queer relationships as an expression of friendship rather than genuinely romantic. It runs deep in Japanese LGBTQ+ representation, but “Blue” makes it clear that Endo and Kirishimas relationship is specifically romantic. In Kirishima’s own words, “We are a real couple.” Still, it could be said that the film intentionally plays with this cultural stereotype, with Endo seeing their relationship as something passing, while Kirishima is fully and earnestly cashed in.

iSchool sophomore and pansexual Naima (Lilith) Gomez describes a desire for LGBTQ+ media that doesnt “fetishize their relationships” and making sure to “not stereotype it,” which reflects a lot of young queer viewers perspective on the matter. Unlike a lot of lesbian media from this time period, “Blue” doesn’t really hold either of these pitfalls with Endo and Kirishima’s relationship. Honestly, “Blue” doesn’t seem too concerned with its own queerness, but that nonchalantness can in of itself give some respect to LGBTQ+ audiences.

GSA co-president and iSchool sophomore Alex Barahona finds that LGBTQ+ representation has a growing importance “with what’s going on right now considering anti trans and LGBTQ+ laws, more people really need to be aware of the community.” Because the community is in such a precarious situation at the moment, approaching that needed LGBTQ+ representation with tact is essential in raising positive awareness.

However, in modern media this can lead into issue of making queer stories for a straight audience. LGBTQ+ characters become fool-proof, flawless, and most damningly, boring. On the other hand, the leads of “Blue” have the flaws and depth that makes LGBTQ+ representation work. Personally, I seek out representation that paints queer characters as flawed, not because of their sexuality or even in spite of it, but simply because theyre human. I find this specific distinction in media like “Falsettos” or “The Bisexual” and even “Revolutionary Girl Utena,” and “Blue” fits this specificity with its simple yet refreshing approach.

“Blue” by Hiroshi Ando is a complicated, eccentric, and weird film. It’s also a film that I plainly adore. From the unique filmmaking techniques, gorgeous scenery and shot composition, to the simple yet moving LGBTQ+ representation, the elements at play here coalesce into a simply brilliant cinematic experience. Personally, I’m against numerical and objective ratings, but “Blue” comes highly recommended to anyone who has a tolerance for slow and subtle film.